The Scarcity Paradox of Telfar Bags 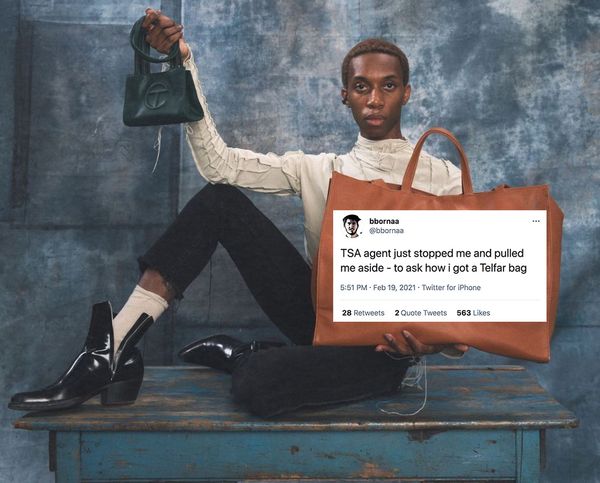 I remember the first time I felt attracted to a Telfar bag: I was in a dimly-lit bordello bar on West Houston for a friend’s birthday party, talking loudly in an attempt to eclipse both the overhead music and my drunkenness. The black, laptop-sized accessory might have camouflaged amid the bar’s infrared light if it weren’t for its embossed logo, whose surface caught the light at a perfect angle. As its owner greeted friends throughout the evening, the bag danced around her hips like a fresh love interest. Needless to say, I was jealous. I wondered what kind of cocktail it might like if I got the chance to offer it something. (Most definitely a martini, I decided later, but with Trader Joe's olives: sophisticated, but practical.)

As I walked to the subway, I kept thinking about the bag—admittedly, in a sad, materialistic kind of way. I suppose this is the allure of the “it” bag: it sticks to your memory like chewing gum manages to find the sole of your shoe. This wasn’t the first time I had seen the bag, but it was the first time I felt curious about it and its, then, mysterious logo. The accessory had subconsciously swum in my aura for long enough that I was now finally feeling attracted to it. Stockholm syndrome.

Different from other “it” bags, the Telfar has been heralded for its affordability, inclusive marketing, and founder’s unlikely background. The “Bushwick Birkin” is often tossed around as a moniker for the vegan leather bag, which telegraphs a cultural cache that’s more accessible, yet more alternative than mainstream designer purses. With a price tag between $150 and $257, it’s nearly one-fortieth the price of the Hermès Birkin, and thus not reserved for the kind of upper class consumers who can afford to splurge on an accessory. This bag is loved by Oprah, AOC, and Brooklyn baristas alike, offering it a range of approval and influencer advertising opportunities. As designer Telfar Clemens told The New Yorker last year, journalists are quick to drop buzzwords like “diversity,” “community,” and “inclusive” when referring to Telfar, whose designer is Black and queer, and was born to Liberian immigrants in Queens. These adjectives might be typical, even banal descriptors for the Telfar bag, but Clemens has, in fact, built something that has proven to be nearly inimitable.

“It’s not for you—it’s for everyone,” reads Telfar’s motto, which sits in a simple black typeface on its website’s About page. This past August, Clemens took the mantra to heart in a particularly laudable manner. Instead of restricting sales solely to “drops,” which, as with other streetwear brands, create competition and render items hard to annex, the designer ensured everyone who wanted a bag could buy one for a limited time. The “bag security program” allowed anyone, anywhere, to pre-order the shopping bag in the size and hue of their choosing for guaranteed delivery this past December and January.

But if you weren’t savvy, decisive, or in the know back in August, the only way to get the bag at its fairest price now is to log onto the Telfar website at 9 a.m. EST on the day of a drop, and do your best to put the bag in your cart and checkout before thousands of other people around the internet, teeming with anxiety, do the same thing.

Perhaps unsurprisingly, many of your potential shopping competitors during a drop are not looking to modify their personal wardrobes, but rather, are out to buy, flip, and profit off the Telfar bag by reselling it on sites like eBay, Grailed, and Depop. Sometimes, according to websites like Refinery29, these competitors aren't even people, they’re robots: the same robots that have forced us to engage in the tiresome process of identifying the mountain top amid a series of pixelated photos taken on a Nokia flip-phone.

Shopping secondhand from vintage stores and resale sites is a trend that’s gained traction for the better: Recycling products! Reducing waste! Spending less on the fast fashion brands whose demand churns waste in the first place! But buying new items with the intent of flipping them is not quite as altruistic, particularly in the case of Telfar: a brand whose ethos is easily dismantled by the fray of the free market.

Grievances, predictably, have flooded the internet: “You Mfs are really buying all the telfar bags and reselling them for 2x the price knowing it’s a lot of black people (specifically black queer people) who want these bags. Fck y’all,” one Twitter user wrote. “Telfar Clemens didn’t make the price range of The Shopping Bag as affordable as it is for any ‘ol reason. He wanted to make luxury affordable for ALL of us. It’s literally the slogan of Telfar Global,” asserted another. Several sellers on Poshmark—the normcore older sister of Depop, whose commercials frequent the seatback screens of Delta flights—have created campaigns urging buyers not to purchase from virtual “closets” that artificially increase the price of Telfar bags. The garden variety Poshmark seller looking to clear out their closet might not have the same thirst for profit that hypebeasts do, but the result is the same. Even the casual seller typically has the financial acuity to Google the going price of their previous purchase, and sell it accordingly.

Telfar loyalists—who feel heartened by, and proud of the designer’s mission—are disgruntled for good reason. I’d like to hope that enough people care about Clemens’ aspiration more than their desire to make some extra cash, but it’s difficult to envision that happening in a marketplace that, by design, rewards competition. As Clemens has explained in interviews, this brand, founded in 2005, yields products in a phased approach due to the small batch nature of the business. “We did not plan some kind of strategy around making the bag scarce...it takes time to make bags, and put them on a boat,” Clemens told Complex. While this scarcity is perhaps just a facet of production time and resources, it’s hard to deny that it's also good for business. Telfar bags, it seems, benefit from sitting in the center of a kind of sui generis Venn Diagram: financially accessible, yet just practically inaccessible enough to remain desirable.

It’s tempting to wonder what would happen to Telfar should our economic system hypothetically rework itself in a way that would allow Telfar bags to become truly ubiquitous, eluding the possibility of resellers or scarcity. What if the shopping bag suddenly became available at its original price through department stores like Nordstrom and Bloomingdales, or even more pervasive retailers like Target? If it was so omnipresent that your mom who knows nothing about trends could purchase the bag for its functionalism, and unwittingly induct herself into the Dimes Square amphitheater, would it still be cool? Or would it become pedestrian?

There are some labels, of course, that are so attainable that they telegraph stylishness in an ironic kind of way (i.e. Carhartt, Dansko, and other brands that your parents might actually wear for their comfort or sensibility), but I’m inclined to think Telfar is too young to fall into the “classic” taxonomy, and would more likely become a Supreme or Palace: something that perhaps once felt fresh, but now feels charred, stale, and a little lame.

For now, though, Telfar’s duality is serving it well. Last year, when people’s lives were filled with fewer in-person engagements and more sweatshirts radiating with the fragrance of three separate dinners, the half-life and churn of trends came into question. It’s exciting to realize that, during a year of brand bankruptcies and store closures, Telfar is the kind of label that can retain an alluring buzz and continue to be profitable. Our current economic system is stifling, and it's refreshing to watch a designer refuse to take on a fatalistic outlook that avoids the complex challenge of creating a product that makes a real attempt at accessibility. While Clemens can’t dismantle the forces of capitalism, there’s something to be said about his commitment to doing his best in our current environment.

When I imagine myself inside a bar at some unknown future date, I’m wearing a Telfar bag of my own (size medium, forest green). I’m feeling resplendent in my outfit, and wholly in vogue. I’m talking to friends with my mouth rather than a creepy smize, and I’m, for once, a little excited that the person next to me is wearing the same accessory.