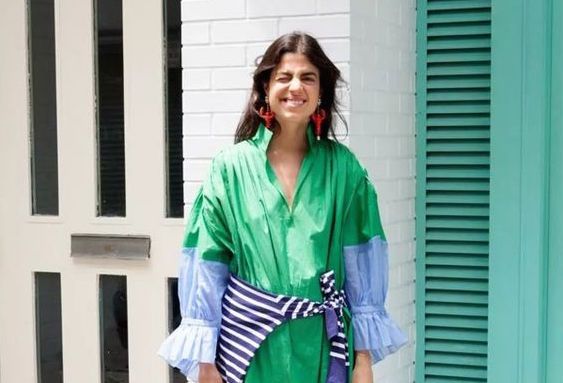 In a recent review of the Gossip Girl reboot, television critic Willa Paskin ended her dispatch on privileged youth with a lofty elegy: “In American life, no matter how much money a person has, there’s no one who doesn’t want more of it. We’re warped all the way to the top.” Reading Paskin’s conclusion in a cold-induced fugue state, I recognized the statement as easily swappable for the ending of a story about Leandra Medine Cohen, the other Upper East Side cultural phenomenon receiving rebuke on Twitter that day.

The impression Leandra had on me throughout her heyday was never one of ostentation, but rather unruffled confidence. It was always clear she was wealthy, but her project was more complex than brand or lifestyle flaunt. Explicitly, it was to create a space where women could express themselves, a practice she encouraged through her own sense of shamelessness. She was unabashed: vivacious energy, unbrushed hair, untouched eye bags, a humorous writing style, and most notably, eccentric outfit combinations. Man Repeller—the website that began as her personal fashion blog and quickly evolved into a popular women’s media brand—naturally developed a similar sensibility. This aura of individuality, perhaps paradoxically, was the common trait that seemed to be a prerequisite for working at Man Repeller. Whiteness and an elite liberal arts education were high on the culture fit checklist as well, but it’s “the vibe” that was most overt; the thing that allowed people with amorphous titles like “brand director,” “headquarters coordinator,” and “social associate” to become Instagram influencers simply by associating themselves with the brand and adopting its aesthetic vocabulary. Being a Man Repeller employee had so much internet cache that at least one of its former writers has been able to build her own editorial media authority by relying on the Instagram audience she cultivated while working there.

Instagram was Man Repeller’s command center. Anyone who read the website’s confessional personal essays and recommendation listicles probably arrived there via the app, where the publication displayed its distinct visual narrative. It was marked by monochrome outfits, mirror selfies, minimalist nightstands, confessional captions, long hashtags, block letters, french bulldogs, screenshots, scarves tied seven ways, staged shoes, staged fruit, stick-and-pokes, runny yolks, film stills, highlighter, red lipstick, burnt orange, beaded bags, bucket hats, Brooklyn. It’s one of the only publications I can recall whose employees promoted their work more on Instagram than on Twitter. Perhaps that’s because it always seemed to be more about the iconography and lifestyle than the writing—though some of the writing was occasionally good, too. If this is at all telling, I distinctly remember overhearing a former editor of the site explain to an aspiring writer at a workshop I attended that if she submitted a pitch, the team would evaluate her Instagram presence as part of the vetting process (full disclosure: I later wrote a piece for the site anyway). Maybe that sounds shallow, but Man Repeller’s aesthetic—Leandra’s sui generis outfit photos included—was so dearly adored by its followers that as soon as the publication rebranded, an @oldmanrepeller Instagram account cropped up. Today, it boasts approximately 45,800 followers. It’s a little like the @oldceline nostalgia for Phoebe Philo’s creative direction, except that Leandra probably doesn’t have an eponymous fashion label in her future. I’ll never say never, though.

What differentiated Man Repeller from its women’s media counterparts is inseparable from what attracted people to its founder—irreverence, free spirit, ironic humor, a sense of “unfilteredness”—though the brand’s content was obviously edited and prone to self-mythology, as all websites and Instagram captions are. As a fresh college student who considered herself smart but also found creative joy through outfit assembly, I was drawn to a brand that marketed itself as a hub for “the expansive constellation of things women care about from a place of openness and humor, with the conviction that an interest in fashion doesn't minimize one's intellect.” There was something about Man Repeller that felt more quirky, fledgling, and accessible than other fashion sites of its time. This ethos was perhaps best embodied by the witty memo on the site that encouraged you to write to Man Repeller explaining your “dream job” if you didn’t see them hiring for it at the moment. The aspirational scent this call for unorthodox applications exuded was probably no different from the smell of Silicon Valley companies for startup hopefuls ready to snort the Kool-Aid. But of course, this was kooler.

For cult followers of Man Repeller, myself included, it seemed the brand was too valued to be subject to reproach. Not to mention the fact that it did feel more progressive than many of its competitors. Maybe that’s why its intermittent decline was all the more disappointing.

Leandra announced last July that she was stepping back from the brand after it came under fire for its performative wokeness. Her story is a common one by now: After George Floyd was murdered, Leandra reacted by expressing support for Black Lives Matter, while failing to make substantial changes to, or even acknowledge, her company’s exclusive culture, or provide support for the employees of color she had recently laid off. As explained by former Man Repeller deputy editor, Haley Nahman, the company was struggling with its internal politics long before last summer. This makes sense, considering Leandra never seemed to move beyond the corporate feminism epitomized by The Wing’s Audrey Gelman and many of the other white, entrepreneurial women who’ve built fast-growing businesses over the past decade or so.

After Leandra was canceled (which is to say, she started a Substack), and Man Repeller became “Repeller”—a perplexing change that seemed to conflate racial and class inclusion with an acceptance of gender fluidity—the publication shut down and Leandra went silent, only to return with a vague explanation riddled with buzzwords such as “self-awareness,” “accountability,” and “internalizing.” She seemed more concerned with defending her momentary Instagram hiatus than explaining her next steps, and yet, reading it at the time, I was optimistic that it would mark the start of a change for the brand.

Now that Man Repeller has closed for good, Leandra seems to have started over with a newsletter called The Cereal Aisle, where she recounts familiar narratives about dressing herself for hyper-particular occasions. It’s the same Leandra, without the burden of a company to care for. It’s easy to imagine a future in which The Cereal Aisle replicates Man Repeller, peddling dress-shaped Lucky Charms and Fruit Loop candles. That seems less likely now, however.

As most people interested in this topic will know, fashion designer Recho Omondi recently aired an episode of her podcast, The Cutting Room Floor, which included an unbecoming interview with Leandra. Omondi called it “The Tanning of America.” What was possibly presented as an opportunity for Leandra to explain how she’s grown over the past few months turned out to be a gaffe-fest, in which she digs herself into a deeper and deeper hole. The episode, during which Omondi unfortunately conflates Leandra’s privilege with her Jewishness—a decision for which the designer has since apologized—reads similar to the Instagram Live (now Showtime) interviews the comedian Ziwe Fumudoh ran last summer with media figures such as Alison Roman. As Doreen St. Felix explains of Ziwe’s shows, this is a territory that is always unsafe: a landscape designed to set its subject up for failure. That being said, while Omondi’s audio product—now deleted and replaced with something cleaner—was antagonistic and at times anti-semitic, the interview itself surfaced important details about Leandra.

Mainly, the fashion maven seems to lack the kind of self-awareness we might hope for in a public figure who recently lost her business due to personal failure. Of all the ignorant comments Leandra made during the podcast interview, most listeners seemed to glom onto a particularly shocking portion of the conversation, in which Leandra attempts to reflect on her position in the world: “I remember objectively growing up in a privileged environment and feeling like I was always on the brink of being homeless,” she explains of her Upper East Side upbringing. Even stranger, she claimed to have realized the extent of her family’s financial privilege just last summer, while spending time at their Hamptons home. As writer Avital Chizhik-Goldschmidt argued on Twitter, sometimes children of Jewish immigrants have an inherited scarcity mindset, in which they feel a drive toward self-preservation in spite of living amid wealth. Like all anxieties, it feels real, but is irrational. It’s an interesting psychological explanation for Leandra’s naïveté, but even if it’s true, that shouldn’t preclude her from recognizing it as such. Why can’t she find the words?

Rereading Leandra’s Substack apologia from last summer, I was struck by a particular assertion she makes in her introduction, where she seems to be throat-clearing more than anything: “I’ve been drafting versions of an announcement to mark a return to Instagram for a couple of weeks. I’ve turned some into voice-notes. Some into slideshows. I’ve had basically any person I have ever trusted read them over.” Not that her trusted companions helped her create anything groundbreaking in this letter, but where were her friends, her therapists, or her PR people before and during the three tapings of “The Tanning of America”? As the publicist Kaitlin Phillips tweeted in response to the interview, “the idea of Leandra listening to that episode is mind blowing; ostensibly THAT is what it might take, each time, to get a point across to each individual? Lmao who has the time[?]” No one does. That’s why realizing the full extent of Leandra’s ignorance is so troubling.

In hindsight, it's easy to realize how Leandra’s privilege was germane—necessary, even—to her magnetism. You can only truly wear whatever you want if you have whatever you want—and your body type is “clothes hanger.” It’s much easier to take risks, whatever their form, when you have the luxuries of disposable income, a spouse, and supportive family members. Having your writing, your style, and your entire persona become an international hit is a creative’s dream, and realizing that dream is obviously much more likely when you have the means to get yourself started. These are things that Leandra wasn’t able to articulate, or even recognize. She was bulwarked from the world by a golden fortress.

It became clear while listening to her self-analyze that her individuality and her individualism were indivisible. She was creative, unique, rarified, but ultimately unable to give up control, to see outside herself. Her blinkered explanation of why Man Repeller fell—“bad management”—isn’t wrong per se, just inadequate. She exposes without explaining. If someone is “so inside of” their “own experience” that they can’t “acclimate” to the Upper East Side, how do we expect them to consider the needs of their employees and community?

Competition, not community, was Leandra’s natural register. It’s a mode innate to most Americans, but especially the uber-wealthy. The envy Leandra recounts feeling for her high school friends who vacationed more frequently than she did isn’t so different from her feelings about Emily Weiss, her Girlboss compatriot who grew her personal blog into the billion-dollar business that is Glossier. Leandra was too caught up, too far in, to look around. In American life, no matter how much money a person has, there’s no one who doesn’t want more of it. We’re warped. All the way to the top.