Our Wardrobes Belong in a Museum 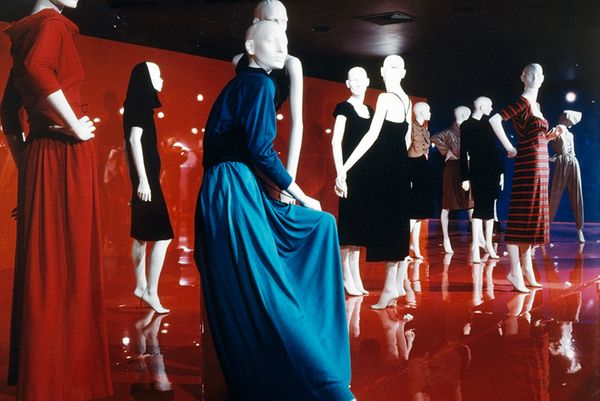 In 1993 Richard Martin, an art and fashion historian with Ivy League credentials and a ferocious appetite for writing, began teaching at the Fashion Institute of Technology. In his time at FIT, he and fellow fashion historian Harold Koda had a remarkably popular run of exhibitions at the institute’s gallery, including “Jocks and Nerds: Men’s Style in the Twentieth Century” and “East Village.” The latter, in particular, celebrated the juxtaposition between high fashion and iconoclastic craft. The exhibit examined the bustling contemporary arts scene in New York City and highlighted garments that were wearable pieces of art.

A New York Times style story from the opening described a party of 700 attendees, many of whom had their own creations on display that evening. The clothes—furnished from dish towels adorned with images of Soviet heads of state and pillbox hats made from tinfoil and bubblewrap—were unconventional and outlandish. The invitation to the exhibition’s opening asked guests to dress in “black tie or the outer limits,” a nod to Martin’s and Koda’s appreciation of old school and avant garde styles alike.

There were echoes of Martin and Koda’s high-and-low approach to fashion earlier this year when “In America: A Lexicon of Fashion” was announced as the theme of September’s Met Gala. Twitter went wild with images of Juicy Couture tracksuits, disastrous mid-aughts red carpets, and Christian girl autumn squad photos, with users ironically declaring that these were examples of American fashion of the highest order. They were onto something: While the actual red carpet will most likely be a parade of Ralph Lauren, Calvin Klein, and Vera Wang, American style is best illustrated through the clothes that people wear every day.

Diana Vreeland, a special consultant to the Met’s Costume Institute from 1972 until 1989, is often credited with injecting life into a previously overlooked corner of the museum. During her tenure, costumes were no longer displayed as ancient artifacts, and exhibitions became immersive experiences designed to connect with crowds. But it wasn’t until 1993, when Richard Martin took over the collection, that the fashion world would be introduced to its current conceptual ethos; one in which intellectual rigor and pop-cultural fascination merge in appreciation of a broad spectrum of styles: strange and ordinary, rich and poor.

Martin’s philosophy was evident from the start of his career at FIT. He brought both an academic’s and an enthusiast’s approach to his work. “East Village” demonstrated an interest in designs that came from all directions. Bottom-up or top-down, it didn’t matter. Martin, Koda, and their co-curator, Laura Sinderbrand, designed exhibitions that examined the lattice of American fashion. The exhibit was uniquely American because it celebrated, as co-curator Sinderbrand noted, East Villagers’ penchant for “shopping, creating, putting clothes together and then presenting themselves at the clubs every night.” It was a collage.

Marc Jacobs would later attempt something similar in his infamous 1992 “grunge” collection for Perry Ellis, as would John Galliano in his Spring/Summer couture collection for Dior in 2000, in which he showed newspaper-print dresses inspired by Paris’s homeless population. But it was Martin, Koda, and Sinderbrand who, years prior, saw the makeshift studios of the East Village’s windowless apartments as equal to the grand ateliers of Paris or Milan and elevated the styles of  the Village’s counterculture to high-end fashion.

Ironically, those who were poking fun at American fashion on Twitter were also championing it by pinpointing the hyper-specific uniforms of mid-aughts scene kids and Starbucks girls. American style is incredibly broad, something most of us subconsciously understand. Martin, though, was very conscious of it.

In “Jocks and Nerds,” Martin and Koda gave the archetypes of the worker and the hunter-sportsman the same due diligence as they did the luxurious stylings of the dandy or the businessman. They were all American style icons in their eyes. In “East Village,” they underscored the significance of common craft in American fashion. By elevating these archetypes in a museum setting, they imbued them with a critical and historical value they’d never had before. The established fashion canon was quickly dispensed with; in its place was something audiences could recognize themselves in.

Why do we celebrate these costumes? Why do we preserve them in the finest museum in the world? We do it because they tell us something about ourselves. Martin was exceptional at broadening the definition of “ourselves” beyond the rarified world of high fashion, and that is what allows us today to feel like Vanessa Friedman when we scroll through our timelines with the same scrutiny we use critique the looks on runways and red carpets.

Martin saw fashion as the most appropriate vessel for understanding the culture. From his 1998 essay, “Addressing the Dress”:  “Increasingly in the twentieth century... we are witness to the preeminent power of fashion as our lifestyle art and belief system.” At the Met, he went on to champion it as such.

Although the department shrank following Vreeland’s tenure, Martin’s contributions to the collection during his decade as curator were significant because his pedestrian methods of collection mirrored average Americans’ own approach to shopping. In one instance, he famously bought a Jean Paul-Gaultier dress “absolutely off the rack” from Century 21.

"The Met used to take only couture pieces,” Martin told The Baltimore Sun in 1997. “Now we are including bowling shirts and ready-to-wear." A Cristobal Balenciaga masterpiece could now be found alongside your great uncle’s senior league championship shirt, and they were both deemed significant.

From April 6 through August 22, 1999, the Met hosted an exhibition titled “Our New Clothes,” highlighting the Costume Institute’s acquisitions during Martin’s run as head curator. In “Our New Clothes: Acquisitions of The 1990s’ Checklist,” a document with installation methods and item descriptions for the exhibit, the Met compares its perpetual question to the fundamental problem every fashion connoisseur faces. “Is this simply that human urge to peruse the closet, find ‘nothing to wear,’ and go shopping?” they ask. “No collection can be static, least of all, the ‘best.’”

While “Our New Clothes” was simple in comparison to Martin’s most famous FIT exhibitions, it captured the same underlying ethos. The collection that Martin inherited was not etched in stone but constantly evolving, something all of us can recognize when we open our own incomplete closets.

Martin battled cancer during the execution of the exhibition. He died in his apartment less than three months after the exhibition closed. “Our New Clothes” served as a walk-in obituary for a man who dedicated the last years of his life redefining the Costume Institute’s wardrobe and fashion.

Martin understood when he took the reins of the Costume Institute that everyday garments deserved the same consideration as haute-couture. That everyday people were curators and collectors too. That this mindset was part of the American philosophy of clothing. While Martin was as academic as they come, he had a fundamental trust in the public to understand fashion as high art. He broadened the scope of what was considered beautiful, and this attracted new audiences to his exhibitions and to fashion generally.

“Richard once told me that he thought contemporary fashion was simply more interesting than most contemporary art,.” wrote Martin’s friend and colleague Valerie Steele in a piece dedicated to his life. With a once-in-a-generation intellect and work ethic, Martin strayed from a formal art history path to pursue fashion because he believed it to be the best artistic vehicle to understand people and people the best way to understand culture. When you look around today, it appears Martin’s wager was a safe one.