Save the Inwood Arch 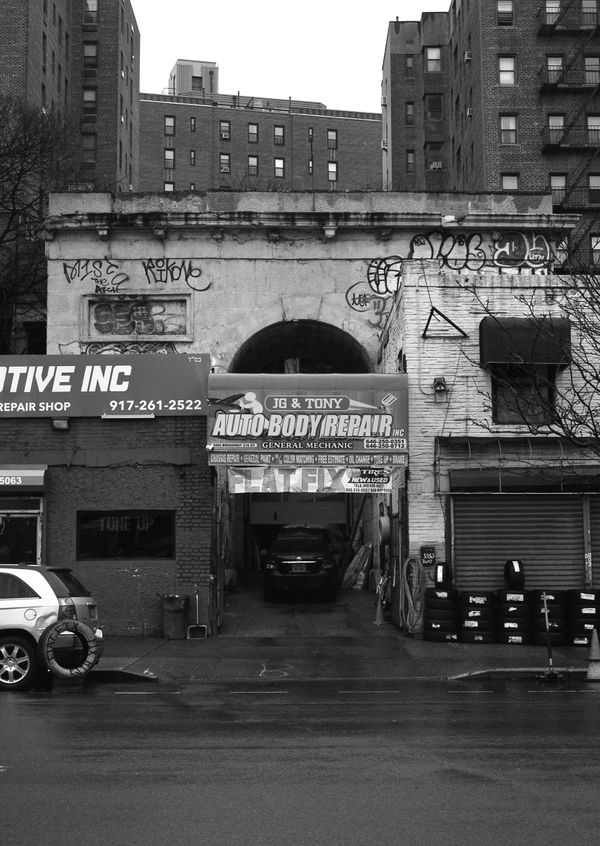 Words and Photos by Daniel Girma

There is a 35-foot-high, 20-foot-deep, marble triumphal arch at the northernmost point of  Manhattan. It is one of only four post-Roman triumphal arches in New York City, along with the Washington Square Arch, the Manhattan Bridge entrance off Canal Street, and the Soldiers’ and Sailors’ Arch in Grand Army Plaza. Why this arch is omitted from the decisive Wikipedia “List of post-Roman triumphal arches” is a mystery to me. The Dewey Arch (1899-1900), formerly of Madison Square, is allowed a spot—It only stood for a year, and it wasn’t even stone.

The insult does not stop there. The other three arches are listed as historical landmarks by the Landmark Preservation Commission. Two of them, The Washington Square Arch and the  Soldiers’ and Sailors’ Arch, are symbols for their districts. The Washington Square Arch is one of  the city’s talismans. You can find it plastered on brochures and posters and flyers, cameoed in local broadcast news intros and Law & Order establishing shots, molded into key chains and refrigerator magnets and earrings ($18 at the Metropolitan Museum of Art).

Even the name is disputed. Some call it the Seaman-Drake Arch, alluding to its original owners, one of many aristocratic families that lived in northern Manhattan at the turn of the last century. The arch was the entrance to their estate’s winding driveway. For others, it is the Inwood Arch, named after the neighborhood that usurped the old gentry whose names now mark the streets: Isham, Dyckman, Nagle, Vermilyea.

Inwood has grown around the arch to the inch. A pair of automobile repair shops—one of  which owns and uses the arch as a driveway—and a retaining wall sandwich the structure. Graffiti covers the crumbling entablature, and the marble has been blackened and chewed away by acid rain. Ivy climbs through the bare windows and bores into the piers. Walls are painted an eggshell yellow to  match the buildings in front, and the intrados are lined with soot from idling cars.

That it has survived at all is incredible. This city is a monument cemetery. The Original Penn Station’s “Don’t Amputate—Renovate,” “Save 5Pointz,” or “Save the Stables” are a handful of the many death rattles from this common grave. No one has ever spoken for the arch. There have been no rallies held or petitions filed for its preservation. It has slipped through the cracks, too obscure to destroy or save. Even more remarkably, it is still, technically, used for its original purpose: a driveway.

There were once stairs that led to an attic inside the arch’s right pier. This was the office of the gatekeeper, who watched through the small windows for arriving guests. Whatever memory was there has been erased; the roof collapsed decades ago. Things like the gatekeeper’s registry, a catalog of the giants who would pass through the arch’s iron gate (only the hinges remain, also  painted over in eggshell yellow) with annotated arrivals and departures, have vanished. All of those Dyckmans and Nagles and Vermilyeas would have been inside the pages.

“Mount Olympus,” visitors called it, or “Seaman’s Folly,” or the big, white, marble thing on top of the hill. French women on horseback posed in the sculpture gardens. A well was hidden inside of a wooden gazebo. Two cupolas peeked over the trees that covered the 26 acres owned by the Seaman-Drakes. Ivy crawled up the walls, and two rows of daisies led from the estate to the stables. 145 relatives competed for the deed to the property after Ann Drake Seaman died, a Titanomachy that ended with Lawrence Drake, Ann’s nephew, as the sole victor. He sold the property 28 years later, and the Mount Olympus estate was gone 30 years after that. The Seamans got a street; the Drakes did not.

The arch is all that survived, like the mythical gates to Mount Olympus where Horae marked the cycles of time. Did the gatekeeper mark it as well, perhaps unknowingly? Maybe he was a smoker and stained the ceiling like the cars did the intrados. Maybe the walls were painted an eggshell yellow, or a houseplant was perched on the windowsill to make the most out of what little sunlight came in and add some life to the room.

If only it were possible to go back, tear away the ivy and soot and graffiti and eggshell.  Would the gatekeeper believe me if I told him it was his arch that stood the test of time, that all the people he welcomed and dismissed are now names that we know but don’t recognize,  fastened to lampposts and written on the awnings of bodegas? (“What on earth is a bodega?” he  might ask.) Could I convince him to let me through the gate, feel the grass before it is torn from  the ground, pluck the apples from the trees? More than likely, he’d find me mad and order me to leave before he called the authorities. He would be right to do so. My name would not be on the list.

Daniel Girma is Laid Off NYC’s content curator and co-edits our Politics section. Get to know him better: @dangirmanyc