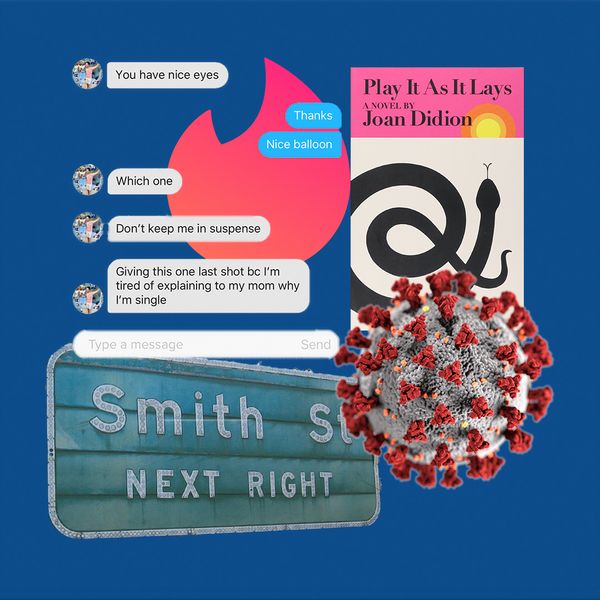 In March of 2019 I broke things off with a Carroll Gardens bartender who was 4 years older than me and never let me forget it. After 6 months of many a sleepover and barely any sex, I realized I just wasn’t that into him. The self proclaimed thoughtful and nice person that I am, I decided to meet him and end it in person.

We sat at a tiny table in a way-too-crowded-for-a-Thursday bar on Smith street. After an obligatory surface level catch up, I jumped into the awkward “let’s just be friends” conversation. The asshole in him responded with classic older dude digs like “Did you think we were dating?” and “How many relationships have you been in?” or “You’re actually really immature, Alex”. I threw back some snubs about his sexual indifference towards me and his constantly putrid natural deodorant. He leaped out of his chair, looked at me, and stormed out of the bar in a wrath, toppling his chair over in the process. As I waited awkwardly at the same tiny table, staring at his chair laying on the ground, I counted down the minutes it would take him to smoke a cigarette and walk away. Finally, after a solid 5 minutes, I left. I was so deeply relieved that I never had to see or speak to him again.

Since then, I’ve barely ever thought about him other than in one of those “what the fuck was I doing with that guy” self-loathing moments. But now, writing this, it’s got me thinking.

I haven’t dated anyone consistently since that unfortunate experience. It’s not that I’m all shriveled up and covered in cobwebs. I’ve gone on dates and met cute guys, but nothings lasted. I can give you a whole long story about the reasons why, but they’re not all that interesting. I guess I just am comfortable being alone. And I got lazy. Maybe even a little insecure. Sometimes it’s easier to stop putting yourself out there altogether in the hopes of avoiding disappointment and a broken heart. If I’m being really honest, I’m comfortable when I’ve got no stakes in the game, nothing to lose.

In February 2020 I told myself that I was going to snap the fuck out of my lazy comfortability. I was actually inspired by this beautiful Irish lad I’d met on a Wednesday night in Greenpoint. He was tall and handsome and had bright green eyes. I’m not sure who sparked up the conversation, but it was sparked. He placed this big, strong hand on my lower back. His palm rested on my waist and his fingertips hovered over my belly button. I felt so small in his grasp, the good kind of small that sort of repositions you in the world. I didn’t realize we were kissing until my eyes opened and I saw my friend staring at us. He had big, sharp features and I was shocked that someone so attractive had kissed me. The night progressed and the conversation flowed seamlessly. He asked for my number at the end of the night and said, “We should do this again sometime”. I typed both my name and number into his phone and hit the save button. We kissed again and went our separate ways. I spent days waiting for a text but it’s been months now and I still haven’t heard from him. Hey, Kieran… if you’re reading this, it’s not too late!

Does that sound desperate? I don’t think I care…

Anyway, in an attempt to move on from my long lost Irish lover, I (re)downloaded Hinge and made a saucy new profile. Whenever I went out I scanned the room for anyone that seemed appealing, but it was February and cold and I didn’t go out too much. I also may or may not have returned to that same bar in Greenpoint not-so-secretly hoping to bump into that familiar sexy brogue.

Before I knew it it was March, and suddenly the world had been infected with the “he-who-shall-not-be-named” of the muggle world; COVID-19. All of Brooklyn, and it's surrounding boroughs, entered a state of confusion and fear. Toilet paper quickly disappeared. All the randomly crowded bars closed. People started dying. Thousands of people, per day, dead. And most of the world walked into their homes, locked their doors, and have barely left since. Myself included.

I quickly accepted the fact that it was not the time to climb out of my shell and snap the fuck out of my comfort zone. On the contrary, for the first time it was actually socially acceptable for me to bury myself deep into that shell and hide… hide content in the comforts of my protected, albeit lonely, heart. Not only did putting myself out there present the risk of getting hurt, it presented the risk of getting sick with the sometimes undetectable, vastly unknown and completely terrifying illness that is COVID. The virus slowly but surely became the best excuse to avoid trying to meet someone new.

But the promise I made to myself lingered in the back of my mind. I spent night after night eating chicken cutlets and watching Six Feet Under with my mom. I FaceTimed and HousePartied with basically everyone I’ve ever met. I finally started reading Joan Didion. I even made mushroom risotto once. But quarantine was pretty depressing, and the longer it got the more I wanted some sort of male attention. So, naturally, I started to spend hours on all of the dating apps, instead of the one that I was on before. Is there anything more satisfying than swiping right on someone and thinking to yourself “this person definitely swiped right on me already” and then being right about it?! There probably is, but when you’re on Tinder for an hour straight nothing beats it.

But, as times gone on and I’ve chatted with countless guys, I’ve realized I haven’t exactly put myself out there at all. I’ve had meaningless conversations with strangers that go absolutely nowhere. Whenever they ask to meet in person I stop responding and tell my friends its because I’m nervous I’ll get COVID and subsequently kill my mom. For the sake of being honest, though, the true reason I don’t meet up with these guys is because I’m scared I’ll be disappointed or hurt. I’m terrified of the multitude of possibilities that actually trying presents. And this fear isn’t necessarily because of that Carroll Gardens bartender or my long lost Irish lover, I think it’s because I’ve spent so much time avoiding that I’ve forgotten how to actually do the whole thing. Being cooped up for months hasn’t helped. COVID really set me back.

So, for now, you’ll catch me on Hinge or Tinder showing you some guy’s profile looking for reassurance that he’s actually cute and somewhat normal. Or watching an obscure independent film based off of someone named Willie’s recommendation. Maybe even getting catfished by someone pretending to be a model, @gwneff was that really you? I may not be creating a deep connection with someone I want some sort of relationship with, but at least there’s humor and entertainment. And ego-boosting thanks to Chad Yourdad on Hinge who only sends me James Blunt lyrics.

Here’s hoping that Dr. Fauci’s vaccine will magically give me the courage to go on a date.

Get to know Alex better, @alexantoniou__  for all her latest creative endeavours.