“How are you?” I’ve found myself repeating “not much to report”. It has almost become a mantra, a catch phrase. Funny how phrases and words in this crisis have become systematized and transformed; a new regimen for conversations.

D’ya reckon the phrase ‘batshit crazy’ will take on new meaning after this whole debacle?  Might have to shelve that one.  A guy from Texas once told me a dodgey joke about Latina maids and something about a house being ‘spic and span’. He should shelve that one.

Topic 1: We’ve all taken a fancy to the scientific names of different animal groups. An unkindness of ravens, a business of ferrets, a pandemonium of parrots, or a fever of stingrays. Well in my bountiful amounts of time spent on the computer, I have found myself searching for the scientific term to describe a group of Pangolin’s. If a collection of armadillo’s is ‘a roll’ and a group of anteaters is ‘an armory’, then there’s got to be something we can muster up for our friends, the Pangolin’s.

Topic 2: As I’ve always found it — art is defined as the transfer of experience. I was reminded of this as I watched a Youtube version of Arakimentari, a Japanese film documentary by Nobuyoshi Araki and scoured my usual cryptic internet forums. You can find pictures of Hatian Jack, Alpo Martinez, and even Bushwhack Bill after shooting himself in the eye; scans from ®FEDS and ®DON DIVA magazines; and anyone and everyone is free to chime in and comment, much like a holding cell convocation.

Anyways - it’s clear Araki longs for a woman with a big, bright grin and black vinyl hair.  The film features Tokyo’s Kabukicho district, best known for its adult-oriented nightlife, smoky pubs, and late-night snack bars, all crammed into lantern-lit alleys in Golden Gai.  The film is all encompassing: it follows him bookbinding, shooting, and interviewing.

When I lived in Shepherd’s Bush, a district of west London England, the man of the house had something of a catchphrase…’I like the cut of his jib.’  Jib, meaning face. I used to sit, swelling with longing, wishing I could be face-to-face with all the past recipients of this old-fashioned compliment. I wanted to experience all the jibs that I tragically missed. It reminded me of the feeling you get when a woman is parallel parking her red convertible with a cigarette hanging loosely from her mouth, knowing good and well words will never be exchanged. I certainly like the cut of Araki’s jib, but you can miss me with that sailing shit.

Another highlight from the world wide web is the right-wing conspiracy theory--Adrenochrome.  Seriously, give it a google. This conspiracy has something to do with the catalytic oxidation from adrenaline– a supposedly intense, euphoric feeling. It naturally occurs after extreme trauma, moments before death. The conspiracy claims that it’s the drug of the Hollywood Liberal Elite– harvested from tortured children in Satanic rituals.  It’s even referenced in Fear and Loathing in Las Vegas.  Harvested from children, Adrenochrome is extracted from hormones in the brainstem via the adrenal glands… well so they claim. Hilary Clinton is the mastermind manufacturer of torturing children and extracting said hormone in pizza shops. Tom Hanks caught Coronavirus from a bad batch of Celine Dion’s haul, who is apparently the highest priestess in the church of Satan. Oh, and Marina Abromovich is involved?  Well fuck me, I guess I’d try it…

I learned this past week of the death of my good friend Christopher Johnson a.k.a. SAME, a.k.a. Cornerstore Chris. It broke my heart. I feel like everyone is being erased. All of the best.

SAME was the realest New Yorker and undoubtedly the funniest person I’ve ever known.  Whether it was surfing J-trains over the bridge, freebasing, or just going to the beach -- I cherished every moment with him.

When you first meet people, you notice the differences between you and them. As time goes on, you start to notice the similarities.  I guess this is how all friendships begin.

Age was nothing in his eyes. We received the same treatment as anyone else…"Serf shut the fuck up!  They’re homies not sons.”  We could both be described as gurgling, colorific princes of excess and poor impulse control.  Always driving fast and taking chances.

From the Upper West Side, SAME was an all out legend.  His rap trio was called Team Facelift and they were like Gods to the younger generation -- like me.  Team Facelift consisted of Alden, SAME (Machine), and Fat Jew who most know from scrolling on instagram.  **Puts forehead to palm.  The same palm to forehead moment you have after seeing a white girl fresh from her Caribbean holiday with cornrowed hair.

I believe that there’s really no such thing as the agony of dying.  The body, I’m quite sure, shuts off pain in your last moments.  Something within you knows it’s about to go—Peptide hormones are released by cells via the pituitary gland and hypothalamus; Endorphins.  They hug and overtake the cells responsible for feeling pain and you fly out of this world in euphoria.

No longer ‘alive with pleasure,’ rest in paradise Chris.

Read this article by Cat Marnell recounting her time with SAME:
Dawn of the Dustheads

My week’s been paved with opal sadness. It’s more and more a reminder that the time you enjoy wasting isn't time wasted at all.  And that we should not take this life too seriously as it can easily vanish.

You can keep staring into your liquor and wondering what to do.

‘Frightened eyes never lie,’ so stop tap-dancing around the saloon, and go up to her and tell her how you feel.  You get nothing by pretending to be above it, standing with your heel hiked on the wall… You should saunter on the hoods of crimson cadillacs. You should embrace the internal tornado, let it rip open your insecurities like a house on the Oklahoma plain.

The end is undeniable, like listening to Cool by Gwen Stefani— you can pretend all you want, but that shit slaps.

1—Pretty Maids All In a Row

Columnist Jack Irv is Laid Off's weekly contributor. Come back next Thursday to read more of his column. 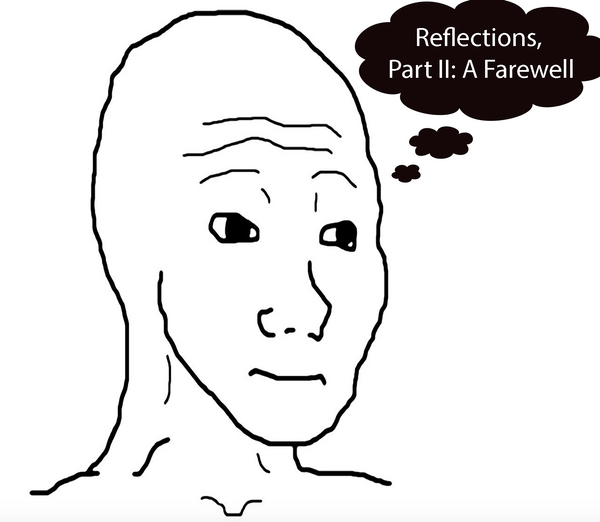