A Fall from Grace: VS Collective and the Crusade of Fantasy Destruction 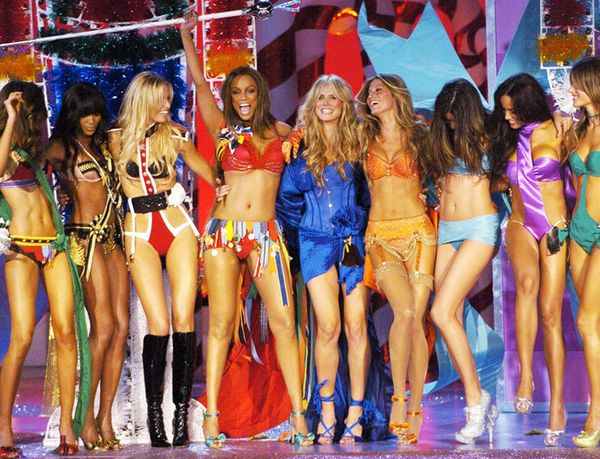 “I think functionality is probably the sexiest thing we could possibly achieve in life,” Megan Rapinoe told The New York Times in June. Coming from the renowned soccer star, it’s not a particularly surprising posture. But when viewed under Rapinoe’s new authority as the face of Victoria’s Secret—a brand that has long been the de facto tastemaker of mall-grade sex appeal—the comment strikes as straight-up bizarre.

Indeed, the idea of utility over sensuality seems to be the thrust of the heritage lingerie brand’s new VS Collective, a “partnership platform” intended to usher in a new, more palatable and profitable chapter of company identity. As of now, the Collective amounts to a fresh ensemble of brand ambassadors including Priyanka Chopra Jonas, Paloma Elsesser, and Eileen Gu—women who, as the Times put it recently, are “famous for their achievements and not their proportions.” Indeed, the women of the Collective will also moonlight as business advisors; in the partners’ official bios, VS was careful to credit each woman first for their activist efforts, last (if at all) for their actual modeling cachet.

This is telling on its own, as it reveals a marked shift in the way we’ve traditionally thought about modeling, from a craft unto itself to a symbiotic relationship between a persona and a brand. Today, the profession is just as much about actual modeling as it is about deploying PR savviness. And increasingly, it’s one that demands overt signifiers of a vague progressive agenda in order to be publicly validated and, therefore, monetarily worthwhile (for both the model and the brand).

The VS Collective faces a particularly sticky marketing challenge, as it comes as a direct response to derision Victoria’s Secret has received in recent years over its entrenched culture of misogyny. Between a Times investigation that exposed former chair Les Wexner’s ties to Jeffrey Epstein, myriad reports of harassment within the company, and ex-CMO Ed Razek’s refusal to hire trans or plus-sized models because they didn’t align with the brand’s “point of view,” the business fell out of the good graces of the progressive-identifying public.

Much of the criticism was well founded, and the series of scandals prompted a necessary restructuring of people and practices. But the public seemed to conflate VS’s poor workplace and business ethics with its aesthetic sensibility, to take the latter as unassailable evidence of the former. Obviously, Razek’s comment betrays his personal prejudices: It’s clear that he himself wouldn’t work with any trans or plus-sized model, regardless of the ways in which they may have actually aligned with the company’s larger look and feel. But the notion that this particular feminine beauty ideal necessarily evinces a deeper misogyny only exposes our own rudimentary grasp on the issue. Furthermore, it prompts us to ask whether we are comfortable with a brand having a point of view at all.

Take the fate of the company’s premier entertainment offering: the Victoria’s Secret Fashion Show, which, from 1995 until 2018, boasted a larger-than-life, absurdist rendering of American sexuality. The show’s models—a storied canon of so-dubbed “Angels,” from Heidi Klum and Tyra Banks to Karlie Kloss and Chanel Iman—presented a winged, rhinestone-studded, nearly Vaudevillian fantasy of eroticism. That the brand exclusively cast women with Barbie-esque proportions became, on its own, grounds for scrutiny. And, in the end, it resulted in the literal cancelation of one of the country’s most notorious freak shows.

Now, the women of the VS Collective are tasked with overhauling both the brand’s public-facing image and its larger cultural reputation. The company has made all the correct gestures of corporate Diversity and Inclusion; even the word “collective” flies in the face of traditional business hierarchy, evoking a culture of fairness and shared wealth. But given that the company chose to abandon its aesthetic vision as proof of its internal structural changes (which speaks more to the empty marketing concept of the “conscious consumer” than it does to the very real concerns of those criticizing the brand), the VS Collective reads as little more than a defensive, surface-level PR move.

Optics aside, the abandonment of the Victoria’s Secret Angels in favor of the Collective surfaces a different, thornier issue about how we’ve come to evaluate a brand’s commitment to equity: whether or not we see our bodies, and our interests, represented in it. As consumers, it appears that we’ve lost sight of the obvious fact that advertorial content is a fantasy being peddled to sell a feeling, and instead have become committed to internalizing it as a judgment about ourselves.

It’s one thing to want to expand the options—both in sizing and modeling—for the vast majority of women who find themselves outside the ‘90’s supermodel ideal. Indeed, much of the commentary on Victoria’s Secret has lost sight of the product itself, which could (and should) be a bridge between the fantasy of its marketing strategy and its consumers. As Shannon Palus recently pointed out in Slate, it is the size-restrictive products at Victoria’s Secret themselves that could truly benefit from increased inclusivity. But the collective delusion that we deserve to see ourselves depicted in catwalk fashion and advertising—industries fundamentally unconcerned with representing reality—feels more rooted in self-absorption than in the actual production of justice.

Today, we seem increasingly unable to be moved, motivated, or even stimulated by anything that doesn’t directly invoke our experience; this self-righteous approach to consuming entertainment—whether in art or advertising, as the lines continue to blur—seems to have zapped us of the ability to appreciate, or even to imagine, a world outside our own.

This identity-driven call to arms seems especially misguided for a lingerie brand that never trafficked in reality to begin with. Victoria’s Secret was never interested in offering us something realistic—Razek himself explicitly described the brand’s vision as a “fantasy” (albeit one that conveniently dovetails with his own discriminatory practices). Rather, the company was entranced with the miraculous and the hyperreal, and in turn, in bringing such phenomena to the lives of laypeople. The Fashion Show itself, with all its gaudiness and kitsch, was closer to a celebratory circus than a didactic display of top-down beauty standards. Even the best-selling products, among them the gravity-defying “Fantasy Bra” and “Miracle Bra,” proposed the possibility of something unnatural—something decidedly not real—that felt titillating to explore, or at least to watch.

By contrast, the VS Collective endeavors to flatten this margin of abstraction and instead institutes the mundane as the pinnacle of sex appeal. Of course, “functionality” (and functional underwear) does deliver a real value proposition, but it’s one that is decidedly different from—perhaps even diametrically opposed to—the time-honored brand promise of Victoria’s Secret. Therefore, in rejecting its prior “point of view” (narrow as it may have been), the new, watery attempt at the “universal”—all bodies, all experiences—ultimately scans as a branding overcorrection.

Perhaps most unfortunately, it’s not even one that excites: The Collective advances little more than a limp sexuality more interested in performing a service than in actually turning anyone on. In fact, the new premium placed on utility threatens to vilify the very concept of desire (itself something inexplicable), and casts aside all our other nonfunctional fantasies—those that simply exist to delight, daunt, and arouse.

The Angels have fallen; in their place we have ourselves.

Emma Baker is a freelance writer and a graduate of NYU's Cultural Reporting and Criticism program. She writes about self-image and consumer culture, and lives in Brooklyn. Get to know her better: @emmagigabytes