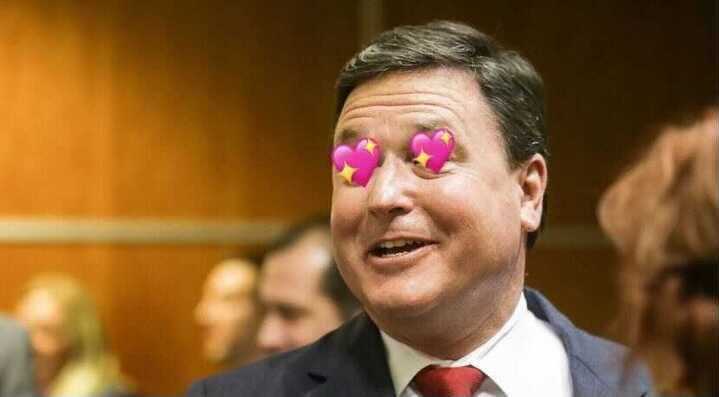 On Feb. 14, Indiana Attorney General Todd Rokita tweeted an image of a Valentine’s Day card with a cartoon illustration of former President Trump that read, “You Stole My Heart Like a 2020 Election. Happy Valentine’s Day.” This spiritless attempt at trolling Democrats was ultimately aimed at causing a national controversy, something Rokita has been interested in doing since the Capitol Hill riot.

In a Jan. 9 post on ToddRokita2020.com, Rokita announced his intention to test the limits of Twitter’s policies by tweeting in support of then-President Trump and waiting to see if he would be banned from the site, as Trump had been earlier that week. No such ban occurred. But his Valentine’s Day post finally struck the right chord, and Twitter flagged the content as “disputed” and “a risk of violence.” (Twitter eventually would remove the notice.) Rokita’s pivot from aspiring establishment figure to online free speech warrior was a long time coming, but his recent post signals the beginning of a great migration for those who have tried to court the establishment for so long: from think tanks to online forums.

Rokita’s political wager tracks if you consider his career. Following his stint as Indiana’s Secretary of State, he won a 16-candidate primary and went on to represent Indiana’s 4th Congressional District from 2011 to 2019. During that time, he had two unsuccessful bids for office. In 2016, when then-Governor Mike Pence accepted Donald Trump’s Vice-Presidential nomination, Rokita ran to become the party’s gubernatorial nominee. Then-Lieutenant Governor Eric Holcomb was selected by the Indiana Republican Party to lead the ticket instead. In 2018, while running in the Republican primary for U.S. Senate, Rokita proudly donned the MAGA hat and fully embraced Trumpism on the campaign trail under the slogan “defeat the elite.” In a now-infamous TV ad, he wore red boxing gloves and hit punching bags with his two primary opponents’ faces on them. He lost the three-way race to Mike Braun, a populist southern Indiana businessman who was even more in lockstep with Trump than Rokita was. This time it wasn’t the party elite but Republican regulars who rejected Rokita and his best Trump impression to date. Although he lost, Rokita had found a corner of the party where he finally felt comfortable.

Rokita’s transition, from Reagan-era respectability politics to scraping the bottom of the ideological barrel, is weird but not surprising: the bottom of the barrel has been his only place to turn to for some time. Perhaps it is a better fit for him. What is unclear is how far down he is willing to go.

Pivoting from “common-sense conservatism” to online outrage is a proven strategy. It fueled Donald Trump and has been useful to ambitious right-wingers who are comfortable with conflict. Attention-grabbing and controversial views can break through social media algorithms; measured policy discussion can’t. Chaotic ideology guarantees exposure, and disdain towards the establishment has proven successful. Look at Rep. Marjorie Taylor Greene’s conspiracy theorizing, or Rep. Lauren Boebert’s small militia of open-carry waitresses. These politicians have conjured a virality that has brought them influence and power, but Rokita’s antics have not yet given him nearly enough momentum to make him a household name. His demeanor may be well-suited to this new branch of conservatism, but is he willing to fully embrace its delusional ideology? Considering his political career thus far, it might be the step he needs to take to ascend to a higher office.

Trump’s Twitter ban has created a vacuum. The former president’s absence online has all but decimated his disinformation campaign, and with it, his stranglehold over reality. Looking ahead to the 2022 and 2024 elections, it’s clear that Republican electoral success hinges on occupying as much real estate as possible in the right-wing online outrage apparatus. Rokita saw the winds blowing in 2018 and has doubled down on his efforts to cause controversy ever since.

What is interesting about Rokita, and most Republicans who are trying to pull off this maneuver, is their inability to mimic the true crazies in their party. Watching Republicans who were raised on Reaganomics and “compassionate conservatism” try to impersonate Donald Trump’s specific brand of grievance politics is like watching the former president dance at his rallies. It’s a strange imitation, like an alien attempting to replicate human behavior. Many establishment politicians find the act too foreign, or just don’t have the touch.

We’ve seen it on a national level. Watching Sen. Ted Cruz and Sen. Josh Hawley vying for the insurrectionist base in the lead-up to the Jan. 6th assault on the Capitol was like sitting through someone doing another comedian’s routine at an open mic. The setups were weak. The punchlines were even weaker. Rokita finds himself in the same position as Cruz and Hawley. They only have about five minutes of working material each, but perhaps that’s all they need for now. They are just opening acts, practicing for an imaginary headliner waiting somewhere down the road.

Maybe Rokita finally feels free from the establishment  he aspired to be a part of. Maybe he sees the current moment as the most opportune time to jump ship. Whatever the reason behind them, his instincts are correct. Republicans fear nothing more than being primaried from the right.

But as we saw in Georgia, down-ballot Republicans suffer from not sharing the ticket with Trump, even if they have Trump bona fides. Even Kelly Loeffler and David Purdue’s quality Trump impersonations were not enough to put them over the top. Moving forward, Republicans running for national office will need to fully commit to the bit if they want to see electoral success.

Mere days after Rokita’s Valentine’s Day post, Adam Wren reported in Importantville that Rokita was (and continues to be) employed as a strategic policy advisor for Apex Benefits, an employee benefits brokerage firm. In an attempt to garner some notoriety and win over the online populist base, he exposed himself as a typical Republican, one who has casually consolidated business and government and enriched himself along the way.

This series of events is indicative of the predicament so many Republicans face, on both the local and national levels: To restore the status quo, they need to reconcile an extreme voter base with existing establishment views. They need the voting power of the base if they want to enable deregulation and continue appointing conservative judges, but the base wants to tear the whole system down. The Capitol riot brought this tension front and center.

I’m not sure longtime Republicans understand the steady ground they’re leaving or the uncharted waters they’re entering. With his Valentine’s Day post, Rokita risked estranging himself from the establishment he has tried to court his whole career. The move did little to boost his Trumpist credentials, and the ensuing revelation of his cozy relationship with Apex Benefits scored him no points with those who see crony conservatism as the enemy. The question is now one of accounting: Has Rokita put enough time and effort into being a strident Trump supporter to endear himself to Trump’s base?

Rokita’s strategy seems like the obvious future for those on the fence of Reagan-era conservatism and Trump-era theatrics, but I find it difficult to see how Republicans who choose this path won’t get pinched on both sides in the GOP battle royale. Rokita seems to assume that his bland comedy routine is as effective as the truly delusional rhetoric of his more extreme Republican peers, but this theory is unsubstantiated. The kind of conservatives who have cast themselves as moderates for so long lack the stomach for true extremism. They are like mountain climbers trying to reach the summit of the radical right with injured establishment climbing partners. They need to cut the rope, but even if they do, success is not guaranteed; they may be sacrificing their compatriots for nothing.

To prepare themselves for full-contact cultural warfare, Rokita and Co. must do more than simply impersonate the extreme personalities of the far right. Trump is either in their hearts or he isn’t, and his base has an uncanny ability to tell the difference. Rokita will need to pull off a grand romantic gesture if he wants to be the far right’s Valentine. If all he's got is low-level trolling, he'll be stood up yet again.