The Hopeful Wanderers of Schitt's Creek 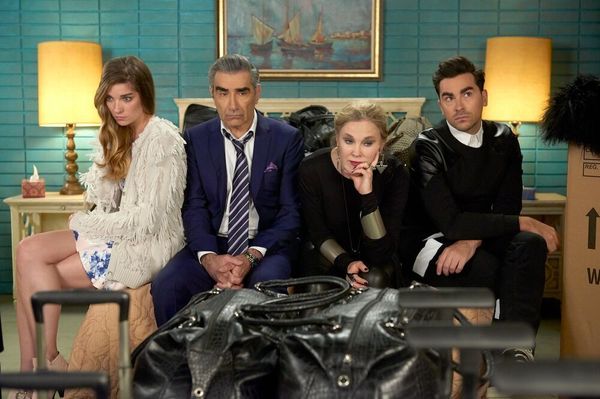 When Schitt’s Creek swept the Emmys last September, winning every major comedy category it was nominated for, I was surprised. Not because I didn’t like the show—I loved it. I had watched it night after night, cooped up in a room under the staircase of my parents' home in Karachi, during a three-month lockdown period. I reassured myself that if the Rose family could overcome their bankruptcy—if they could find love, joy, growth, a home, and themselves in a small town with a name that sounds like an expletive—I, too, could overcome the hurdles the pandemic had set in my way. What surprised me about the clean sweep was the shift it revealed in what audiences perceive—unanimously!—to be great comedy.

I am an avid TV comedy watcher, but it was only after I watched Schitt’s Creek that I realized it's possible to create comedy without employing the tried-and-true tropes of previous sitcoms. Although, at first, the humor is superficial—almost nasty—the show is quick to evolve into a comedy that doesn’t rely on commenting on a character's appearance, gender, sexuality, or religious beliefs to garner laughs. It doesn’t challenge anyone or anything. Instead, viewers are treated to the doings of an odd, almost alien, nuclear family that is trying to behave and live like normal people but failing at every attempt. The plot is less interested in catering to traditional comedic impulses and than in character building, sprinkled with moments of hilarity that feel organic, almost profound.

Schitt’s Creek gets its name from the show’s setting, a rural backwater where the once-fabulously-wealthy Roses settle after a financial misadventure. It is, in fact, the only asset the family has left—bought in jest years ago by the patriarch, Johnny Rose (Eugene Levy), as a gift for his son. The makers of Schitt's Creek, the father-son duo of Eugene and Daniel Levy, play with the Aristotelian ideal of comedy, which centers on the turnaround in fortunes of ordinary and pitiful characters. But the Roses are far from ordinary. Their behaviors are exaggerated, and the only thing that (barely) evokes sympathy for them is that they have lost the only life they have ever known. It is the way these unordinary people try to live in an ordinary world with ordinary problems that makes them sympathetic.

In the first season, the characters are largely unlikable, with the exception of Johnny, who seems to be the only level-headed, no-frills member of the family. Moira Rose (Catherine O’ Hara), Johnny’s wife and an ex-soap opera star, loves her wigs—two of them named Kristen and Robin, who “don’t like each other”—more than her children. David Rose, their son, played by Daniel Levy, tells his soon-to-be best friend, Stevie Budd (Emily Hampshire), that his pants cost more than her car.

The series could have easily set shop on a plot line with the characters fighting to get out and expressing their disdain time and time again. Instead, it creates characters who are fighting to be happy.

In a roundtable discussion with his cast members back in 2019, Daniel Levy said, “Ultimately the show is a joy chaser, a little bit. You have everyone just trying their best to find a happy life.” The series is filled with snarky dialogue and a whole lot of whining and complaining, but at its heart is a family that wants to do better for itself and for others.

It is no wonder that, over the course of six seasons, we see the family’s prodigal daughter, Alexis Rose (Annie Murphy), find true and genuine love, graduate high school, get a college diploma, and start her own PR agency. Alexis enters the small town as an offensively inconsiderate socialite, but she ends up with a remarkable empathy that allows her to let go of the love of her life, Ted Mullens (Dustin Milligan), for the sake of circumstances that allow both of them to flourish professionally. By the end of the series, there is a certain maturity in Alexis, who initially rejects Ted’s advances in the first two seasons because of a lust she harbors for Mutt Schitt (Tim Ruzon). When professing her love to Ted in season 5, she exercises restraint, and the entitlement she held onto in the earlier seasons disappears, as she tells him she has no right to ask him to even be with her.

The Roses’ empathetic evolution is not always seen in grand gestures, but often in smaller moments: when Alexis lets Stevie be David’s maid of honor upon realizing that she is going through a rough time; when Moira gives Alexis the flowers that had been sent for Moira after the premiere of Crows (a film featuring Moira that Alexis promotes); when Johnny takes Bob Currie (John Hemphill), the owner of Bob’s Garage and a member of the town council, out for drinks to console him when his wife leaves him; when David agrees to stay in the town he’s been trying the whole series to leave because it’s where his new husband, Patrick (Noah Reid), wants to be.

The slow and eventual vindication of so many of the show’s characters is a testament to how time and adversity can change people for the better. Though it started as a comedy, Schitt’s Creek earned its success by teaching its audience to be more compassionate, more hopeful, and always in search of bigger pots to grow in.