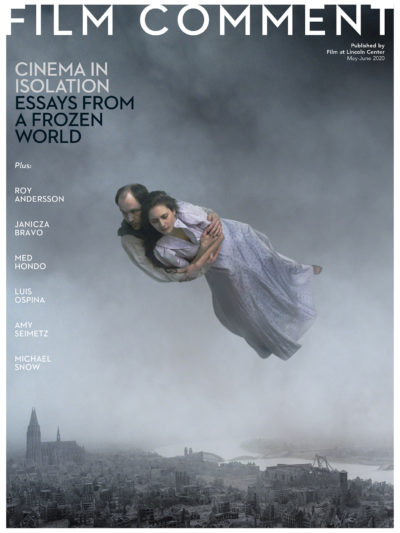 Film Comment is back! After a hiatus prompted by the pandemic, the magazine announced its relaunch with the return of The Film Comment Podcast, offering exclusive perspectives on current affairs in the film industry, as well as a weekly newsletter with original film criticism, features, reviews, interviews, and news. As one of the oldest publications for highbrow film criticism, Film Comment is considered the standard-bearer for American and New York film culture. Past contributing writers include doyens Manohla Dargis, Roger Ebert, Manny Farber, and J. Hoberman. I spoke to Film Comment’s co-deputy editors Clinton Krute and Devika Girish about how they pivoted the publication towards the digital world, what they learned from the pandemic and the future of Film Comment.

First I want to thank you for bringing the magazine back! It's very important for New York-based cinephiles and cinephiles worldwide. What happened during this period? Any good memories or anecdotes?

Clinton Krute: Right after we announced our hiatus, there was sort of a social media pop up, where everybody was posting their Film Comment cover from their birth year. Your feed would just be flooded with Film Comment covers and it felt very nice to know that there was so much support for the publication, and that so many people were following it.

I’ve been looking forward to this day for such a long time. What step are you currently at right now? Is there a specific day that you're going to release your next issue?

Devika Girish: Now we are in the first stages of bringing Film Comment back. We put out a press release that covers where we were at when we resumed the podcast [last March]. The next stages are still being discussed internally. We're really happy to have the voice of the podcast back in the discourse bringing critics, filmmakers, and guests together to reflect on the current cinematic landscape, which obviously, has undergone a lot of changes.

How do you plan the content for each episode of the podcast?

CK: The editorial team is currently just Devika and myself, so all those decisions are made by us.

DG: The podcast is more curatorial; we don't solicit pitches. We figure out a place for our interests and our engagement with cinema and with the world. Sometimes we start with guests and their ideas, and the theme will grow out of the guests, who are interesting critics, writers, filmmakers or thinkers that we want to feature on the podcast. We did an episode with A.S. Hamrah and Blair Mcclendon, who are critics; and Blair is also a film editor. They've never been on The Film Comment Podcast before and they're very smart people who reflect intelligently on movies and how movies are situated within culture.

When I have talked to students who’ve read Film Comment, they said it's a very New York-style magazine, even though it faces people globally. If it were an LA-based magazine, do you think it would be more like Rolling Stone or Variety?

CK: Do you mean in terms of the criticism?

Yeah. Variety and Rolling Stone talk about the film business. Film Comment is more about artistic films, independent films. It might be my stereotype?

CK: Well, I mean, the magazine was founded in 1962. It was started by a handful of cinephiles in New York City who were college students wanting an outlet for serious film criticism at a time when there was nothing like that. But just to be clear, we also have a lot of respect for other cities: Los Angeles, London…

It’s interesting that you mentioned London. I’ve found that Sight and Sound, the British Film Institute magazine, is in a similar position as Film Comment, which is connected to Film at Lincoln Center. I would compare Film Comment with Sight and Sound.

CK: Yeah, and I think it's also important to remember that Film Comment is part of a nonprofit, much like Sight and Sound is.

Film at Lincoln Center hosted the US premier of Chloé Zhao’s Nomadland last September. I found the New York Film Festival subconsciously built a bond with New York-based filmmakers. What’s your idea of the “New York spirit?” How do you enhance it?

CK: Following the New York Film Festival, there was a lot of momentum. As Film Comment is one of many projects of Film at Lincoln Center, we were able to use that momentum to get off the ground again. I would hope that the publication still retained some of that spirit, of an independent and high-minded voice.

DG: Our spirit or character is influenced by the fact that we're based in New York and the New York film scene, which—like you said—tends to favor repertory, independent cinema. New York City is a base for all kinds of international cinema and art-house cinema; it's been a center for avant-garde filmmaking. Over the decades, Film Comment does represent that character of the New York film scene.

Let’s talk about online platforms. Did you find that making Film Comment’s archives accessible on Zinio helped the publication reach a newer or a broader audience?

DG: The last issue that we made (the major one) was not printed, and that was released fully for free on our website and Zinio. We hadn't done that before. It was an exceptional situation. A lot of people who miss having the print issue are able to access it on Zinio even more than before, but I'm not sure if we have benchmarks for that sort of thing yet. We’re not really at the point where we're measuring reach as affected by changes.

Will the online mediums, including Film at Lincoln Center’s virtual cinema and The Film Comment Podcast, make the magazine less specifically for New Yorkers than for a broader audience?

DG: I can only speak to the podcast. Just to be clear, Film Comment is a program of Film at Lincoln Center, but we are an independent voice from Lincoln Center. We don't directly work on [their] virtual cinema and we don't overlap with the programming department in such an explicit way. The podcast is not a new digital move that we made because of the pandemic, but the virtual cinema is something new, so it may change the FLC audience and reach. Before the pandemic, the podcast helped us reach a larger audience outside of New York and urban centers where Film Comment was easily available, and I think that's still the case. We are New York-based, but film culture is borderless and global. Before the pandemic, we would see movies on New York screens and we’d go to festivals. Of course, we were exposed to what's happening elsewhere. People choose to live here in the city because it offers so much and it's such a rich multicultural place. We utilize the resources that New York makes available to us to comment on global film culture and to serve a global audience.

Travel bans and other policies that restricted movement made it difficult to attend film festivals. How did you adjust?

CK: It seems that there'll be virtual components going forward for all the major film festivals, at least for the foreseeable future.

DG: Yeah. The main changes with more virtual platforms and virtual cinemas are new categories for what counts as streaming, what counts as home video, and how to conceptualize new releases. It took a second for the industry to figure that out. The virtual cinema phenomenon is probably going to continue for a while, so I think new releases will be digital as well as in the theater. The only thing for us is figuring out how the industry is putting out new films and adapting to that.

What happened last summer forced everyone to reckon with racial justice. Have you found that you need to exercise a new social responsibility, such as introducing more diversity, especially after the BLM protests? Did last summer’s events impact the kind of content you plan?

DG: The events that took place—the murder of George Floyd and all the conversations that arose out of that—made us reckon (and I'm speaking on a personal level now) with the ways in which all the work we do, whether it's in art, in culture, in more social spheres, is closely tied and intertwined with issues of racial justice, with economic justice, with carceral institutions. It made me personally reckon with how the work that I'm doing contributes to or subverts those systems. As editors, we're definitely approaching our work with those ideas in mind and with all the conversations that we've witnessed or participated in over the last year.

Film Comment is a place for writing that talks about movies intelligently in conversation with what's happening in the world. It’s a platform for voices from all sections of society and representative of different viewpoints and cultures and communities. Obviously, these are our aspirational goals that we hope to implement. It's very important for the FLC at large, for Film Comment, and both Clinton and I as editors that Film Comment is an inclusive and diverse place that shines a light on cinema from all over the world and underrepresented cinema.

Quan Zhang is a cinephile and recent NYU Graduate School of Arts and Sciences grad. She’s inspired by the theatrical experience and deeply interested in the relationship between old arthouse movies and contemporary streaming services. She previously wrote for Washington Square News and is currently writing for SupChina. Read her film quips on Letterboxd: @penal_panel