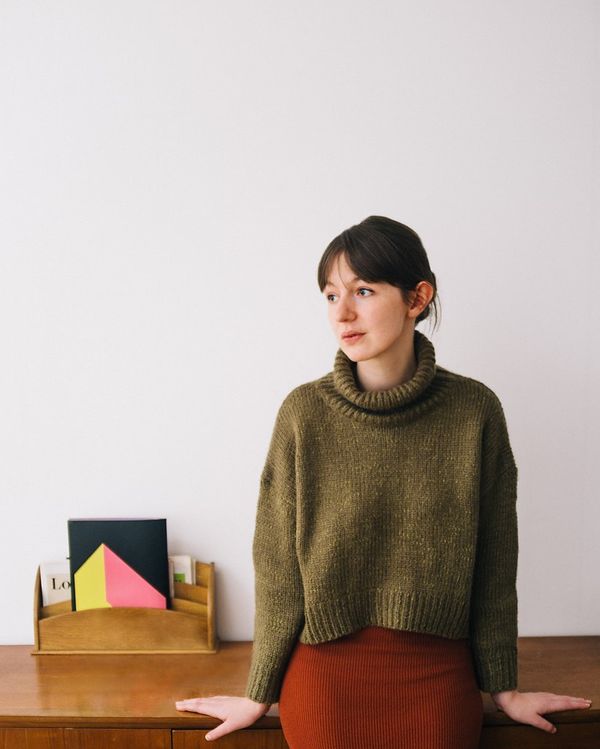 When reading the novels of Sally Rooney, there comes a moment when the surrounding world—if you can remove yourself from the page and reencounter it—begins to take on the sheen of a Rooney description. The edges of reality soften; scenes are bathed in pale, lambent light, like an expensive hotel bathroom. People move more slowly, deliberately—something as simple as opening a messaging app seems to take minutes instead of seconds. Windows assume a newfound significance, as do the colors of buildings, trees, skies, and clothes. (A dress is “celadon,” a crescent moon “golden like a lifted saucer of champagne.”) You might find yourself wanting to dress in the twee, anachronistic way her characters do: to wear a tennis skirt with a sweatshirt and dark lipstick (an ensemble that calls to mind Tumblr mood boards of the 2010s, when Rooney got her start), to pin up your hair à la 19th century heroines (Rooney has spoken extensively about modeling her own work after novels from this era). Or to mimic their other habits: to write long, arch email-letters to a friend; to pursue a desperately complicated relationship with a troubled outsider.

Rooney’s latest novel, Beautiful World, Where Are You—feverishly anticipated by some, prematurely sidelined by others, object of tote bag idolatry and eBay bidding wars—is awash in these kinds of seductive details. Though “details” might be too strong a word for what they actually are. Beautiful World, like Rooney’s previous novels—Conversations with Friends (2018) and Normal People (2019)—often seems more like a preliminary sketch than a full portrait, its scenes rendered in quick, precise brush strokes, a few daubs of color here and there.

There’s a great deal of negative space in these novels, often literally: short eruptions of dialogue leave gaps on the page (a technique some have skewered), though the ascetic quality of the prose doesn’t carry over into the mood, the way plain linen can look severe but feel sumptuous to the touch. The “beautiful world” in question, Rooney tells us in her acknowledgments, is a phrase cribbed from a 1788 Friedrich Schiller poem. (It also appears once in the narration.) But it is also a fair and, for Rooney, characteristically simple description of the landscapes of these novels in all their elegant reticence, their attention to the smooth outlines of material life.

Yet conflict, always, churns beneath the surface. “[N]o god appears before my eyes,” reads one line from a different translation of the Schiller poem, which doubles as an apt subtitle for Beautiful World. Not only do the characters, more than those in Rooney’s other novels, think constantly about religion—its waning importance in urban parts of Ireland, its continued influence over moral codes and strictures in the country—but the tangled love stories that make up the novel are premised on deeply fallible characters: not gods but humans.

Alice, a young, acclaimed writer hiding out in an Irish seaside town after a mental breakdown, meets Felix, a warehouse stocker who often works long shifts in freezing temperatures, on a dating app. (It’s a relief to see Rooney acknowledge the popularity of online dating. Her past novels, though set in the present and populated with sexually adventurous young people, have largely skirted the subject.) Initially wary of each other, they eventually get together, though Felix resents Alice’s wealth—her novels have, improbably, made her a millionaire—and Alice frets over Felix’s mercurial moods. Meanwhile, Alice’s friend from college, Eileen, an underemployed editorial assistant, contemplates a relationship with Simon, a childhood friend, political advisor, and Catholic convert. (Simon’s religious fervor in particular is viewed by other characters as an anomaly, though one of the novel’s most affecting and surprisingly baroque scenes takes place at Mass.)

The sinew connecting these two pairs is Alice and Eileen’s email correspondence, interspersed in chapters throughout the novel. In lieu of the first-person narration that lent Conversations with Friends its immediacy and close-grained feel, we get these highly mediated products of the characters’ consciousnesses—artful missives that often seem more like term papers (replete with references to Wikipedia research) than casual exchanges.

Crucially, in these letters, Alice and Eileen often speak past each other. What begins as a forum ends up as two sets of diaries, written from pseudo-scholarly vantage points: “What if the meaning of life on earth is not eternal progress toward some unspeciﬁed goal—the engineering and production of more and more powerful technologies, the development of more and more complex and abstruse cultural forms?” asks Eileen. The question isn’t really intended for Alice’s response; Eileen is working out a theory by which to construct herself as a political thinker.  But this is all within the boundaries of the Rooney canon. Love, for Rooney, persistently takes shape around (or in spite of) failures of recognition. In a world thick with solipsism, her characters often misread each other and the carefully arranged tableaus—dinner parties, glamorous vacations, sordid rendezvous—in which they find themselves. The catch is that they simultaneously claim to want a different world, one structured around a kind of ecstatic, universal intimacy. “The meaning of life,” Eileen writes, is “just to live and be with other people.”​​

It’s tempting, in Beautiful World, to counter the characters’ judgments with one’s own. Is Felix, dark and confrontational, the toxic partner, or is it Alice, who seems at times to view Felix as window-dressing for her homemade writer’s retreat? Is Alice’s success deserved, or is Eileen the more talented writer? (If Alice, the novelist, is a clear Rooney stand-in—gifted, semi-reclusive, scornful of celebrity—then Eileen, a promising literary critic and essayist, might be the Rooney-who-could-have-been.) Rooney’s trick is to deny support to either side, in keeping with the distributive politics of her previous novels. “Every advantage in a character’s life is balanced with a disadvantage,” Lauren Oyler wrote of Normal People in 2019. Is this Marxism in literature’s clothing, as some have claimed? Not quite. But there’s a certain satisfaction to be gained in watching Rooney steer her characters, chess-piece-like, through their closed-circuit worlds—even if the game is bound to end in a draw.

Yet when it comes to heterosexuality—the subject at the heart of both Beautiful World and her previous two novels—Rooney is markedly less even-keeled. Almost every relationship that unfurls in the Roonian universe is miserable in some way, ranging from ill-fated pairings (Eileen and an ex-boyfriend who recoils from her in a moment of need) to straightforward acts of abuse (Marianne, from Normal People, is nearly assaulted by her brother). Heterosexuality, though, is the tarnished linchpin straining to hold Rooney’s world together, and a dilemma that might be boiled down to the all-too-familiar adage: “Can men and women ever really get along?” Probably not, Rooney tells us, clucking her tongue. In her novels, and particularly in Beautiful World, straight couples confusedly orbit each other, often colliding in disastrous ways.

Writing for Post45’s “Reading Sally Rooney” series, the critic Sarah Brouillette diagnosed Rooney as a heteropessimist, drawing on Indiana Seresin’s theory of “performative disaffiliation” with straight coupledom. As Seresin writes, “[c]ompared to the heady possibilities of the queer world to come, heterosexuality appears unbearably drab and predictable.” Seresin’s heteropessimists absorb and express that drabness and predictability as a way of processing the prohibitive traditions of patriarchal sexuality. (“Heterosexuality is a curse!”) Beautiful World, read as a heteropessimist novel, presents a bleakly cyclical, standardized view of heterosexual life. The sex scenes between both couples are mostly interchangeable, on the level of language and plot (the women “whimper”; the couples “part” after orgasming, which happens without much fuss or effort). Alice and Felix both identify as bisexual, but apart from glancing references to same-sex attractions, straightness seems a foregone conclusion. (The same can be said of Conversations with Friends, which refers to a thorny romance between Bobbi and Frances, the novel’s Alice and Eileen equivalents, but never portrays the relationship itself.)

A blow-out fight between all four characters comprises the novel’s faltering climax. Eileen and Alice repair their friendship, but the two couples are left adrift in irresolution, as if treading water after reaching the end of a narrow lap pool. Do they turn around? Get out of the lane? In a feat of quasi-cinematic magic (Rooney favors jump cuts and quick dissolves, which makes her work eminently adaptable for the screen), the final chapters—two last letters between Alice and Eileen—show both couples living peacefully together (in quarantine, no less). Alice and Eileen lay claim to a contentment they haven’t experienced before, but how long can this fragile harmony last? Is it really enough “just to live and be with other people,” to accept awkward, negotiated coexistence as a “beautiful world”?

Rooney’s characters are self-proclaimed progressive individualists who nonetheless feel drawn to straight monogamy—a supposed form of stability in a time of “systems collapse,” as Eileen memorably puts it—even when it is rife with misunderstanding, cruelty, and the friction that arises when one person seeks self-realization through another. There is no room in Beautiful World for a heterosexuality that functions as a “possible site of experiment and change,” as Seresin writes. Though such a strain can, and does, exist in reality. A less troubled love burgeons, to our surprise, in the ruins that surround us. Rooney’s intransigence to this idea—and her increasing reliance on tepid clichés—makes for an uneven and strangely self-contradictory novel. “There is nothing bigger than what you so derisively call ‘breaking up or staying together,’” Eileen notes to Alice, defending contemporary literature that tends toward the “trivialities of sex and friendship.” Though what good is a novel that only says it wants to probe those “trivialities”—to enlarge and breathe life into them—but ultimately fails to do so?

And yet. Rooney’s writing is so finely modulated, the reading experience preternaturally smooth. (A friend described it to me like “swimming through the clearest water.”) One wants to live in her world, even if her world forecloses on possibilities that our own does not. Rooney is at her strongest when she reaches beyond the themes that have served her best in the past, toward the kind of experimentation she denies her own characters. At Eileen’s sister’s wedding, she darts between perspectives of Eileen’s family, forming an impressionistic, near-lyrical whorl of reflections: her mother thinking of childhood, “[c]old bright summer days, air clear as cold water”; her father remembering his wife’s pregnancies, “how something had come over her, some seriousness, some strange purpose in her words.” One wishes for more of these carefully directed shifts, these deft, willful changes to her regular patterns. Another, better book would have more of them.

One clear benefit of Rooney’s early success is that she has the time, and likely the freedom, to advance as a writer (a privilege afforded to very few). These novels might be considered juvenalia one day. “[L]et me hear your voice, for your voice is sweet,” goes the church hymn as the wedding concludes; so, too, is Rooney’s voice, amid the tragedies she proffers up in her work. If it is partially obscured in this novel, perhaps it will be clarion again in the next.

Sara Krolewski is a writer and student living in Brooklyn. Follow @sarasara_sck for her latest stories.