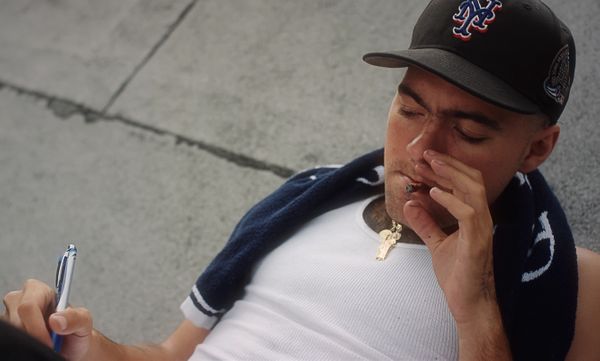 A few weeks ago I walked past a recently-vacated storefront on Orchard Street, inside which a crew of overalled men was gutting fixtures and painting the walls a fresh white. Outside, the new proprietor—a white man my parents’ age, if not older—was holding court on the sidewalk, grinning at passersby and greeting his new neighbors. Out of curiosity, if not fellowship, I approached and asked what sort of business would be occupying the space. “Street-art gallery and cannabis dispensary,” he declared with pride.

I relay this anecdote not to bemoan the loss of local institutions, or the encroachment of capital, or even the humdrum corniness of it all; I honestly can’t remember which brewpub or tapas bar was there a month ago. The proprietor is playing a role prescribed by developers and politicians more powerful than he, just as I—a laptop laborer who, driven by romanticism and the rental market, elected to pass the twilight of my twenties in a pandemic-stricken Lower East Side—am playing a role by scoffing at him. To that end, I wish him well.

This is the neighborhood’s bargain, if not its entire appeal: everyone is playacting. You can playact as someone who sits outside Clandestino and recognizes characters from the Red Scare extended universe, who are themselves playacting as angsty Gawker 1.0 media critics, who were playacting as Koch-era downtown revolutionaries, who were probably emulating some earlier scene or movement I’m not familiar with. It doesn’t matter if you work for Facebook, or commute in from Stamford, or your stepmother is Vice President Kamala Harris. Dimes Square is a studio backlot, but show me a neighborhood that isn’t.

The music video for “Roof,” a single from Wiki’s new album, Half God, finds the willowy rapper stationed six stories above Canal Street. Clad in a Mets cap and a wife-beater, he gesticulates from the roof of a pre-war apartment building, pouring liquor into a coffee mug as the camera pans over the Financial District’s southern skyline. “My roof is my favorite!” he gushes like an eager Airbnb host. “My only kind of entertainment, my own private vacation.” We follow his gaze to the street level, tracing a bike path down East Broadway. The sun sets, and we see the Chinatown lanterns draped across Mott Street.

These images function as a mission statement: Wiki may be a proud denizen of de Blasio’s New York, but his haunts are miles away and worlds removed from the toney environs of Gossip Girl. “Living in the Big Apple, isn’t it amazing?” he raps. “But it doesn’t matter, nothing in this city’s sacred / I’m not gonna hate it, I’ll tolerate it / But just know, I’m the one that’s gotta save it.” Even this sighing ambivalence is, by now, a cliché. Sure, New York sucks, grumble the wizened creatives, but where else is there?

For years now, Wiki has been praised as a beacon of authenticity in a city that laughs at the very notion. “Perhaps no young rapper today embodies this spirit more than Patrick ‘Wiki’ Morales,” Matthew Ismael Ruiz proclaimed in a 2016 Remezcla feature citing Wiki’s disparate influences. “He’s proud of his ancestry, but is quick to admit that when it comes down to it, he’s a New Yorker first.” The article’s subsequent paragraph depicts a cartoon version of a bustling metropolis:

When we meet Morales at an apartment in Manhattan’s Chinatown, he points out that just a block away, you can actually see the melting pot in action. “There’s this block over there that’s so fire, Rutgers,” he says. “It’s like Chinatown meets Puerto Rico, where the projects are, this weird Chinatown meets LES. That block is the block.” And indeed, on Rutgers Street, a four-block stretch in the shadow of the Manhattan Bridge, you can see abuelitas pushing grocery carts past old Chinese men smoking cigarettes in undershirts; young Asian American children walking to school past car stereos blasting Latin music. It’s New York as fuck.

Intentionally or not, the journalist has done Wiki’s dirty work here—namely, implying that his aspirational downtown utopia is an authentic New York experience. In Ruiz’s telling, Wiki is nostalgic beyond his years, an artist who relishes the grit and grime that Manhattan epitomized before its vistas were marred by sparsely populated luxury towers. But in pursuing this angle, Ruiz gives the game away: Rutgers Street is “New York as fuck” only in that it’s anomalous on a racially segregated island where the median apartment rents for $4,100 a month. The Lower East Side looks like an ungentrified neighborhood, which is why it’s a destination for designers, gallerists, podcasters, and Joe Biden’s wayward offspring.

Half God is an album about the ravages of gentrification, but it supplies little in the way of ideas or narratives. Instead, it proffers a more deceptive, alluring brand of propaganda: the notion that if one eats the right sandwiches (bacon egg and cheese with salt, pepper, and ketchup), wears the right clothes (thrifty but tasteful), rents the right apartments (no elevators, no doorman), and roots for the right teams (Mets, not Yankees), we might wrest New York back from the conquistadors. Wiki hates rich people, but he’s less upset about the things they do than the way they act; his grievances are aesthetic in nature.

Delving into Wiki’s identity feels at once illustrative and beside the point. A half-Irish, half-Nuyorican man raised on the Upper West Side, he blends art-world bohemianism with working-class sympathy. In the way that New York Nico commodified himself as a man-on-the-street tourism bureau, Wiki’s city and narrator are often indistinguishable, projecting a panoramic omniscience. New York is a city of nine million, a fortress of obscene wealth and gaping inequality, yet Wiki dictates the makings of a true New Yorker.

These signifiers are identifiable, even visceral. Still, they’re just that: signifiers. On mid-’90s classics like Illmatic and Ready to Die, the ambient sounds of subway trains and park bench chatter served as garnishes for detailed portraits of individuals and their communities. In Wiki’s music, these touchstones are foregrounded, relayed in whiffs and glances, leaving a trail of halal carts and fuhgeddaboudits in their wake. His 2017 solo effort No Mountains in Manhattan plays like a diligently curated scrapbook, a vivid wash of accents, boomboxes, ethnic food, and block parties. He is a renaissance man, and New York is his playground; he plays ball in the park and trades insults with the guys at the deli. He presents a comprehensive view of the modern city, but the experience isn’t quite recognizable, flitting between accounts of a bookshop intellectual, riverside skateboarder, dive bar purist, and hip-hop revivalist.

Like many of his peers, Wiki maintains a complicated relationship with golden-age New York rap, torn between upholding tradition and blazing a trail of his own. From 2011 to 2016, his group Ratking approached the work of their predecessors with art-school irreverence: sure, they missed the old New York, but they were also too young to have known it in the first place.

On Half God, the evangelism of No Mountains curdles into scattershot territorialism. On “The Business,” Wiki laments the ceaseless arrival of out-of-towners: “Turned our blocks to amusement parks when they drunk and don’t know what to do / Don’t know a soul from the city, why’d they even move?” Not once does he stop to consider that his glorification of a melting-pot wonderland might attract those very hypebeasts.

Which makes for a garbled statement: when he’s not scolding the nouveau riche for displacing his neighbors and disrespecting local culture, Wiki still sounds like a freshman writing home about his visit to Chelsea Market. On the downtown travelogue “Grape Soda,” he gets a fade at a Dominican barber shop on Forsyth Street, where “they bet on cockfights, it ain’t all dice / There's more bite than spades or craps / Summer hit and there’s more bikes outside than the Tour De France.” In spite of himself, he revels in this ambassador role, bridging a fading New York era with the scenesters who’ve supplanted it. (Half God is produced in its entirety by Navy Blue, a Los Angeles transplant who did stints as a streetwear model and pro skateboarder before turning to rap production.)

“They say the city don’t love you like you love it,” guest rapper Remy Banks tells Wiki on “Gas Face.” Hip-hop is, definitionally, music about people marginalized in their own cities, the experience of living in a place that doesn’t love you back. But if New York can be condensed to a set of affectations—a lexicon of slang and speech patterns, bagels and Timberlands—what, besides an elaborate costume party, is being lost? If not the dominant strain of bright-lights-big-city agitprop, Half God’s bodega fetishism is yet another version of five-borough exceptionalism easily packaged and sold to consumers.

It’s too bad, because what’s happening in Dimes Square—both on its own, and as a microcosm of New York and urban America—is weird, upsetting, and worth documenting. Take a look at the front page of the latest Drunken Canal, which features a photo of ten white women popping champagne and eating cake with their hands on a block consisting entirely of Chinese businesses. As jarring as it is, the image feels post-political. The Lower East Side is astronomically expensive, yet still cheaper than virtually anywhere else in Manhattan and North Brooklyn, the housing stock disproportionately studios and one-bedrooms. In a sense, their arrival was preordained. Where else would NYU grads go to publish a gossip rag and celebrate themselves?**

This is a neighborhood where the luckiest among us pay $2,400 a month to rent the same tenements our grandparents called home during the Great Depression; if Sex and the City were rebooted for 2021, Carrie Bradshaw would inevitably blog from Ludlow Street in a Kith sweatsuit. There is no way to survive here without a lucrative job or benefactor. The only thing left to defend is a vibe, and in taking up his shield, Wiki defaults into nativism. “Home” is the song that most directly addresses Half God’s theme of displacement:

Just signed a lease, already evicted us
Considering my behavior, should have predicted this
But it’s my home you living in, this ridiculous
And if you can’t get with us, then pick it up
And dip back, pack up the pickup truck back to bumblefuck
This where I’m from, dude
Where everyone come to to run through
[...]
They say home is where the heart is, but I daily departed from every place that I stayed

There’s no historical or experiential lens through which New York is anything but a settlement. Throughout Half God, Wiki’s attention strays from the human effects of gentrification, the brutal conditions and chasmal inequality lurking on every corner in the world’s richest city. Instead, he retreats into blinkered criticism: If not for those pesky yuppies and their contempt for the New Yorkers who preceded them, we could enjoy our idyllic melting pot in peace. To have pride in one’s self and one’s people is as New York as it gets. But who could possibly have pride in this place?

Pete Tosiello’s criticism has appeared in Pitchfork, The Paris Review, and The New York Times Book Review. Get to know him better: @tosiello

** “Where else would NYU grads go to publish a gossip rag and celebrate themselves?” [Editor’s note: Potentially also here (laidffnyc dot com).]