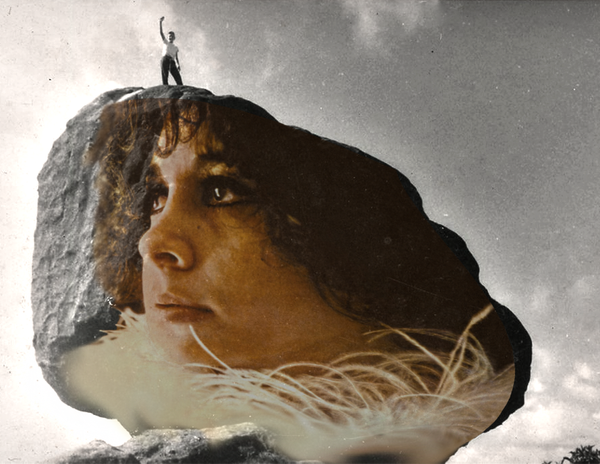 In a darkened room, find a comfortable, totally relaxed position.

Listen to a piece of music.

Think of someone you love.
Do not think of the music.

When you find your thought of the person is gone, bring it back gently.
Let other thoughts come, and then let them go.

As the music progresses, let the thought image of the person be central.
Be unaware of the music.

Let anything which happens happen, except keep easily bringing back, letting, the person image occupy you.

The first time we were called in to fare my father well, I took care to pack the little black Bose.

It was a Saturday morning when the call came. He had been intubated nine days prior, and his general state was deteriorating. Every day, we visited him in shifts of two, often my older brother and my mother, or my mother and myself. Early on, an ICU nurse told us that it was not uncommon for sedated patients on mechanical ventilators, when they wake up, to remember fragments of what they heard. (It is impossible to shut off one’s ears, even under the steady drip of a Fentanyl dream.) After hearing this, I suggested to the family that we should, when visiting my father in the ICU, bring the little black Bose speaker to play him music during our daily permitted visit time.

And on this Saturday morning, nine days after the start of his intubation, the doctors called and communicated in an explicit tone—a radical departure from their subtle and soft management of our expectations in the previous days—the severity of the situation: Things were not getting better. Complications in multiple organs. His heart could stop soon. Should we resuscitate? Unequivocally we answered No: We wanted him to feel no pain. And so the doctors called us in to say goodbye.

We arrived at his hospital room to find that four chairs had been placed around his bed. Near the window, a modest spread of plastic coffee carafes, pale fruit, and sad saran-wrapped yellow cake lay on a small table; the cake’s polyethylene coating glistened in the early afternoon light of late August.

“Oi, meu amor. Estamos aqui,” my mother intoned as she caressed his forehead.

We took our seats in the chairs. I sat by his left foot and placed my hand on his blanketed shin. It was warm and bloated.

The air was pregnant with the sound of medical machinery. The constant breathing of the mechanical ventilator. The steady, slow pump of the dialysis machine. An annunciatory beep from the screen monitoring vitals, and, most crucially, his oxygen saturation level. The trio of machines formed a sort of rhythmic, textural ambient—a sonic stage upon which the drama of our separate and interlacing breaths would play out.

“Maybe, it’s time for some music?”

I turned on the little black Bose and placed it at the foot of the bed. The others looked encouragingly at me as if to say, “It’s up to you, you’re the musical one.”

I thought of an evening, a few years ago, that my taciturn father and I spent alone at home. We sat at the kitchen counter and drank wine with the little black Bose to keep us company. He was not the sort of man to hold onto things. Throughout his life he collected no records, kept no cassettes, compiled no compact discs. But he did listen to the radio. His relation to music was like one’s relation to water when they live by the sea. I played him popular Brazilian songs from the 1960s, melodies I knew he would have heard on the airwaves during his 20s. He couldn’t ask for songs in particular—he recalled none of their names—so I speculated about what he would have heard during this time. A guided memory tour through sound began to take place. Harmonies wafted and glasses were refilled, stories began to flow. One song would evoke this memory, another song that association. He tapped his fingertips in samba rhythm on the side of his glass. About a particular track he would say, “I remember this one from the dancefloors,” or “I used to play soccer with the singers in this group on Saturdays,” or “I fell in love to this.” He told me, in so many words, about what that time felt like: the optimism, the festivals of song, the sun of almost December, the beach. That evening he spoke candidly, extensively, in a way I had not heard him speak before.

In the hospital room, Gal Costa’s 1969 recording of Caetano Veloso’s “Baby” began to play. My mother looked at me knowingly, as if to say “nice choice.” I held on to my father’s leg and listened closely to the lyrics, delivered in imperatives of “Voce precisa” (“You have to,” as in “You have to see this movie”). “Baby” is a song that exists almost entirely in the second person. It is a long list of things that you have to do: You have to know about the swimming pool, You have to see me up close, You have to have an ice cream, You have to listen to that song by Roberto, You have to learn English, You have to know about me. In other words, you have to experience all of these new goods of the ‘60s—this saccharine, slightly plastic optimism. I want to show you all of these things, I want to live them with you; life can be so warm. And if there’s any doubt about the words I sing playfully to you, please refer to my T-shirt, which reads, “Baby, I love you.”