Never Cash Out: An Interview with Heavy Duty Felt 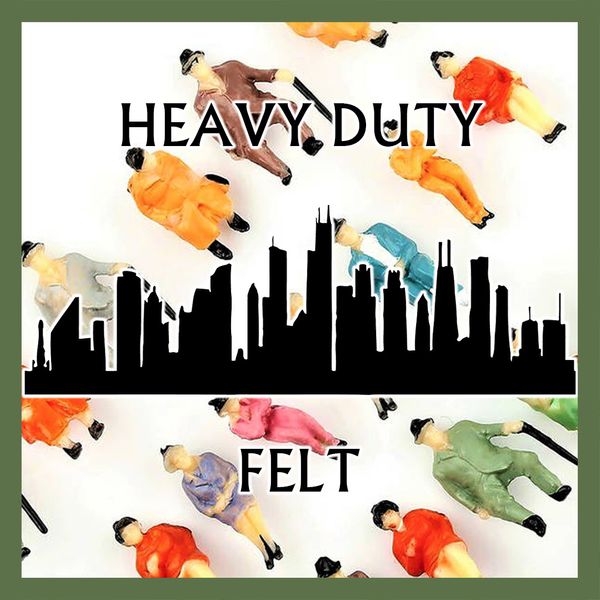 Tony Gudwien has been recording and releasing electronic music under the moniker Heavy Duty Felt for the better part of the past two decades. His body of work is texturally and thematically varied, from ambient drones inspired by Polish Art House cinema to electronic sketches made with Elvis Presley samples, but a common thread connects all his releases. It’s not a mood or a feeling so much as an attitude.

Listeners familiar with music from Chicago in the ‘90’s will recognize the sound—it’s the same one that colors albums from The Sea & the Cake, Jim O’Rourke and Larry Heard, releases from the heyday of Thrill Jockey and Drag City. Something about the snow, the lake, the wind and Old Style beer brought forth a blend of electronic technologies, improvisational jazz, punk, country and rock that resulted in compelling, idiosyncratic music.

Gudwien grew up enmeshed in this musical fabric (Gordon Tech, his high school alma mater, was home to a thriving hardcore scene during his time), and Heavy Duty Felt rides the same wavelength. Though each of his 18 (and counting) bandcamp releases occupies its own sonic space, their point of departure is the same—an unabashed fan creating exactly what he wants to create. His is music made for music lovers, by a music lover, without any regard for commercial or critical success. We talked about the ‘90s Chicago scene, Jacques Derrida, Elvis Presley and the simple joy of never cashing out.

Starting from the beginning, tell me about your life in music.

I put out four or five rock band records in the ‘90s, with vocals and stuff. My first record came out right after Summerteeth by Wilco. The rock community in Chicago back then was super eclectic: You would have people who played in rock bands but also played in Tortoise or Gastr del Sol. Plus there was a monstrous, unprecedented improvisational jazz scene. Chicago was second to none in any conceivable musical way at that point, so you met a lot of people and you heard a lot of music. I got really turned on to electronic music and modern classical and improvisational jazz while I was making these rock records.

And then we get married; we have kids. You can’t strap on a Telecaster and try to play the Empty Bottle at 3 a.m. on a Wednesday night. So I started working on electronic music. I got super interested in all its variations. It’s something you can do in your room with a set of headphones. You’re not making any noise, you’re not bothering anybody, and you can do good work. I got pretty good, at least technically, with regard to the programs and the samplers.

I’ve never been classically trained, but I understand music theory pretty well; I can read a bass clef. I’m not somebody who went to Juliard or anything like that. Mostly it came from being brought up in Chicago.

I remember in 1983, I go to Wax Trax because I want to buy Murmur, the first R.E.M record, so I take two busses there, and Alan Jorgenson from Ministry is working behind the counter. You could like everything (Alan Jorgenson actually didn’t like everything) and find a lot of interesting people to talk with in the Chicago I grew up in.

‘90s Chicago is up there with the best musical periods ever—the combination of indie rock, post-rock, jazz, new classical, Out music. It’s all inspiring. I hear that energy in your music too.

That’s 100 percent the case. Chicago, unfortunately, often takes a back seat to other cities, but with regard to music, it has never had to because of the labels—not just Thrill Jockey, Drag City, Touch and Go/Quarterstick, but also the great blues labels like Delmark, Alligator Records.

On Tuesday night, you’d be seeing Peter Brotzman and Evan Parker at the Velvet Lounge. Then on Wednesday you could be seeing The Sea & Cake at the Empty Bottle, and Peter Brotzman would be in the crowd. That was my life before I got married and had kids.

There’s one show in particular I think of: a late-age Fahey show at the Empty Bottle, with Kevin Drumm mixing.

O’Rourke is a Depaul guy. We grew up around the same neighborhoods and shopped at the same places and are basically the same age. He went to a Catholic high school then Depaul, and he was a Chicago fixture in the mid-to-late ‘80s and early ‘90s. After that, he became Jim O’rourke and travelled all over the world. Him and David Grubbs were fixtures here from ‘86–’92, then became international.

Going from making indie rock to something like Arrivants is a big shift. How did it come about?

It was completely natural. When you’re dealing with non-vocal music, it’s very abstract. With a vocal, you can get across what you’re getting across. It’s only rock ‘n’ roll but I like it. With instrumental music, non-vocal, you have to latch onto ideas— conceptual ideas or musical ones. So if you're hungry for philosophical content in music, the sky’s the limit. It’s about how much time you can spend on it and what your end goal is. It wasn’t that difficult for me to make that leap because I was always interested in conceptual ideas and trying to abstractly represent them in music.

We have expectations for music, right? Well, what are you expecting? That’s Derrida’s big question. You shouldn’t be expecting anything. You should be open to something unconditionally. What does that mean? Well, Derrida comes to the conclusion that it’s not possible—that it’s a regulative ideal, but human beings are not able to be open to anything unconditionally because we are conditioned by language and such.

But the idea with Arrivants was to put different types of music that were somewhat different idiomatically against each other. Like, “OK, now I’ve got to listen to a 15-minute Larry Heard house beat, then after that a lot of detuned timpani.” You have something that comes from Chicago house music on one song and then something that’s Cage-y or Phil Niblock-y on the next. It can either be super-duper pretentious, or, if done with heart, it can be kind of interesting.

With the Arrivants record, the question is, “What does one do when they sit down to listen to music?” And then, on top of that,  “When there’s so much music out there that you can dive into, why do you give your time to this rather than that?” And, “If you’re going to sit down and listen to it, what are you expecting, and what do you do if those expectations are not met, or jarred with, or played with?”

With Miniatures, there’s a lot of tongue and cheek going on. I just name-drop people (Flaming Lips, Prefuse 73). “Cross Cut Country Quarters” is a line out of “St. Dominks Preview” by Van Morrison,  “This Day to Day Running Around”  is from “Everyone Knows This is Nowhere.” It’s just a super deconstructed Neil Young thing. Kalimba Productions is the company that does all of Earth Wind and Fire’s music.

What’s interesting about electronic music is that you can take an idea, a chord structure or a sound, and you can radically transform it. It’s coming from places you wouldn’t think it’s coming from. With Rain in my Shoes is named after a line from an Elvis Presley song, “Kentucky Rain.” So it’s not all Derrida, Coetze, and Polish art-house films. There’s a lot of cultural references. I love Neil Young, I love Van Morrison. I could listen to “Kentucky Rain” over and over until my kids are screaming, “Shut that Shit Off!”

There’s a blurring of the high and low, which is part of the deconstructive process. If you’re going to do it, you can’t be a dilettante—you’ve got to like both. You have to love Elvis Presley and you have to love Milton Babbitt.

This is clearly music made by somebody who loves music.

With absolutely no intention to cash it out. Absolutely none. That’s the ethos in Chicago. Bettina Richards didn’t start Thrill Jockey so she could move to L.A. It’s a labor of love. I really, really enjoy it. It’s not for a cashout. I’m getting nothing out of it except that I like to do it. I mean, it’s fun. Some people have fun Ripstiking or juggling bananas. This is how I have fun.

Get to know Ben better, @hipdiplip for all his latest stories.