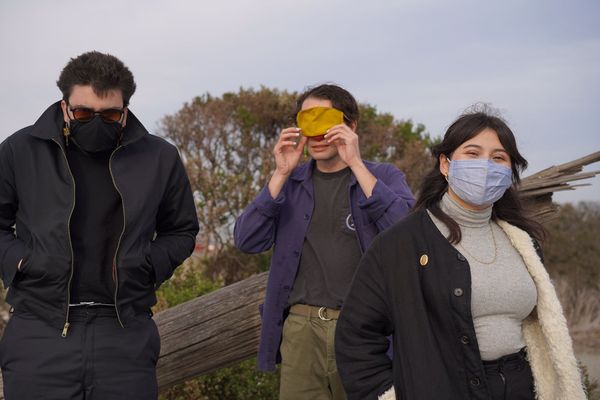 Hannah “Ham” D’Amato has lived on both sides of the continent and in between, but she doesn’t like to keep up with the social media of the fellow travelers and local heroes she meets along the way. She makes this clear within the first minute of Fake Fruit’s self-titled debut album. “No Mutuals,” an antisocial(s) anthem about empty interactions, both online and in the meatspace, sets the tone of a frank yet funny record covering bummer topics such as mediocre sex, male chauvinism, and milk gone bad.

I spoke to Hannah on the phone, a few months after the release of the set of songs she’d started writing in New York in the mid ‘10s, demoed in British Columbia as dusk fell on the decade, and perfected as the apocalyptic storm clouds that obscured the dawn of the ‘20s were just beginning to part. We talked about Fake Fruit, Fake Fruit, and fake fruit.

RAPHAEL: I love Fake Fruit as a band name. I think it captures a jokey nihilism that’s present in the music, especially in your lyrics. What about fake fruit resonates with you?

HANNAH: I think it’s existence is already a little funny. It’s extravagant and not useful, a joke in itself. Also, my grandmothers always had those netted porcelain bowls of fake fruit around. I remember seeing it as a kid and being like What is this? Why is this here? What purpose does it serve?

The new album interacts really frankly with common sources of 21st-century malaise. Do you think total honesty in music is important?

I think it’s really important. I get so fatigued by social media and everyone putting up a front all the time. It’s exhausting and frustrating but also hilarious, so it’s nice to be able to cut through that.

Your music is genuinely funny. Do you think a part of being honest is not taking yourself too seriously?

Oh, yeah. Everyone in the band is very against Cool Guy Syndrome. Through living all over, I’ve seen that everyone has it; no one wants to be sincere at the gate, and that’s not how I operate. But I’m definitely a person who copes with everything bad under the sun with humor, so it’s pretty natural that that bleeds into the lyrics.

To me, it’s that sense of humor that sets your album apart and helps you avoid a lot of genre clichés. Besides CGS, are there any particular post-punk pitfalls you’re mindful of avoiding?

Nebulous lyrics. There’s maybe a little of this on the record—I feel like “Milkman” toes the line of Is this song about something?—but that’s my biggest pet peeve in post-punk. I love it, and I love listening to it, but if I can’t a) hear the words, or b) get down with the work because it’s all over the place—“apple, ornament, chair” [laughs]—that’s frustrating to me. I’m glad you think [my music] is funny, because a lot of people are like “Are you just straight up mean?”

When I first heard your music, your voice immediately struck me as similar to Courtney Barnett’s. Then, after reading a few reviews of the album, I saw that every other music writer had the exact same thought. Are you sick of that comparison or do you welcome it?

I have nothing against Courtney Barnett. I think she’s great, and if I had to be compared to anyone, I would want it to be somebody who I think is great, so that’s fine. But it’s kind of frustrating because I don’t totally hear it and [the comparison] is everywhere. I’m like Damn, is anybody even listening to it or are they just like “Hannah is the Kirkland brand of Courtney Barnett”?

That’s fair. People, especially music journalists, always feel the need to contextualize new things against something we know. I do think, though, that it’s not only the fact that your voice has some similar inflections to hers; you both have a keen observational sense of humor that’s rare in most music. I’m wondering what music makes you laugh.

I like a lot of Andrew Savage’s lyrics… God, who else? There are so many people who make me laugh. I’ve talked about this with my bandmates, but it’s so lazy to be like “Oh, she sounds like Courtney Barnett because she’s not singing something pretty,” or “She’s witty, and there can only be one witty girl, and it’s Courtney Barnett.” I’m curious about who she got compared to coming up because it’s always like that, where people are scrambling like “She’s not a dude! Who do we compare her to?”

You’ve moved across the country twice in the past decade. Can you give me a quick rundown of that journey?

I’m from L.A. and I grew up in Orange County, but I left when I was 18 and went to New York. I was really excited to be out there because so many bands I liked were out there. I didn’t go to school, just the school of hard knocks. [Laughs] I lived there from 2013 to 2018, but I had a really good time out there observing everything around me and going to shows all the time. Before I figured out how to write for myself, it was really crucial to have that incubation.

Between New York and the Bay Area, I lived in Vancouver, BC for a year. The move to the Bay was a pretty easy one. My sister’s out here, and I met one of my bandmates, Alex, through her, and the other two because they all went to the same art school; which is something so cool about playing music with these people specifically, or at least the first lineup of the Bay Area band: Alex, Miles, and MJ, who plays bass on the record. They’re all artists first and musicians second, and it was really cool working with them and seeing the difference.

Were you an artist first?

Nope, musician all the way, no art. I mean, I did photography, but then when I moved to New York, I was like Ugh, I don’t wanna let other people develop my film, because that was half of the joy of it for me. And doing it yourself is too expensive, so I got priced out of that hobby.

Fake Fruit is a few years in the making. What happened between the Vancouver demo and the official release?

When it came out as a demo, not all the songs were on it. It was thrown together last minute so we would have a tape to sell on tour. But yeah, it’s been in the works for a while. It got started with a completely different band in a different country, and I decided I just had to scrap it because I wanted to record it with a more permanent lineup. There were a lot of false starts.

Does it feel weird to have all the ~debut vibes~ around it now, after most of the songs being around for so long?

It does feel weird, but I think it’s also really important. A couple of these songs were written in New York, so I’ve been dragging them around for six years. It felt crucial to hear people say they really liked it. I was like “That’s good that you do, because I was hating it.”

Having those songs for that long, I’m sure you went through many stages of love and hate with them.

Totally, and I still feel so anxious about them, but I’m really excited about the record and the reception it’s getting. But I’m also like This isn’t even half of it! We’re working on so much stuff that I’m so much more excited about, if you can believe it. Not that I’m not grateful. [Laughs]

I love the opening track, “No Mutuals.” It obviously made me think of unwelcome online interactions, but also about awkward real-life meetings, where all you can talk about is people in common. Is that sort of empty, soul-numbing experience the kind you’re trying to get at?

Absolutely. I think that song is the one that’s most about Cool Guy Syndrome on the whole record. It’s about meeting people and being ready to get to know them and put it all out there, being open and nice and then being met with “Do we have anybody in common?” I hate that. Cannot stress that enough! Really don’t vibe with that!

Do you feel that’s an especially New York thing?

I don’t wanna besmirch you, but yeah, kind of. I felt like any time I was hitting it off with somebody at the bar and they were super friendly, I’d ask where they were from and they’d say California. And I’d be like God dammit, this doesn’t count!

“Yolk” is another track on the album I really enjoy.  A runny yolk can symbolize so many things. In the song, it’s the epitome of disappointment. I think disappointment is an interesting place to write from, and one you write from a lot on this album. Why is that an emotion you like to channel?

When I hear lyrics about issues that I also struggle with, it’s really humanizing and grounding. I felt that writing from that place was a good way to cut through the BS. Yeah, I don’t always have a good time. Sometimes I don’t feel good. Sometimes I’m so anxious I can’t even get out of my bed in the morning. It also helps me exercise those demons, because then I’m like That’s silly. What’s stopping me?

The album’s final track, “Milkman,” has some similar themes—warm, curdled milk here seems to serve the same purpose a cold, runny egg does in “Yolk.” I love the refrain “Hot sidewalk, no shade, milk curdles, with age.” But what I love even more is the line “The wholesome reign of the American milkman.” Do you identify with the plight of the milkman, an American staple driven to extinction by American progress?

[Laughs] Maybe a little. I was on a walk in some picturesque neighborhood where the houses looked really old and uniform, and I was like Hm, whatever happened to milkmen? They just kind of disappeared. It was just one of those things where you’re like Wait a minute, what’s going on? And then I researched it. I think I can relate, or at least sometimes I do. Easy to feel like you’re going extinct.

Did you find out anything interesting in your milkman research?

You know, it was so long ago and so early in the morning that I didn’t really take much away from it.

This album is filled with mundane objects that have potentially sexual, potentially existential undertones. Do you think all these things—fake fruit, egg yolks, curdled milk—have special meanings if you dig a little? Not just in your songs, but in general.

Definitely. I think it would take some of the magic away if I said “This is what I was thinking when I wrote this,” but you’re totally right that not everything is completely literal. There’s a lot of symbolism in those songs…  so good listening! [Laughs]

Let me rephrase that question a little: Do you think mundane or quotidian things are more interesting to write about than big concepts like love or death?

What gets me excited about lyrics and poetry and writing in general is when you can make a metaphor and wrap it up inside an unexpected package. You’re like Dang, I feel all those things, but I never thought about it like that!

Raphael Helfand is Laid Off NYC’s Editor-in-Chief. Get to know him better: @raphaelhelfand