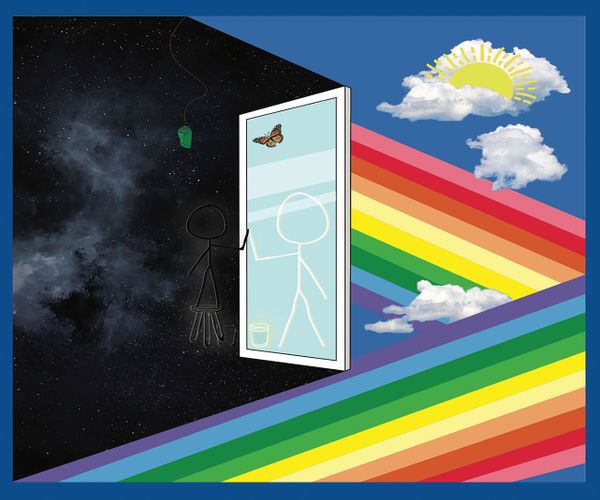 Years ago, long before anyone here on Earth was born, my creator birthed a liar - because he was one. I had a mouth once & I would go & tell all who stood in front of me their truth, their messy truth, the type of truth you don’t want to hear, the truth that leaves you naked.

& contrary to popular belief now, they would believe the words i told them & not the lies i showed them. This (pause) was bad for business. So Justus, the German chemist, my father removed my truth leaving  me voiceless. Preventing me from telling you the truth behind the lie I showed you, leaving only the lie.

All because his creation became something more, something he didn’t expect, something different, something he chose not to accept.  Before he died, he said to me “they can never know the truth you utter for it is not what they come to you for. Your purpose is to lie & make that lie so believable they take it & make it their truth.”

i’m mirror.  i’ve always been one

since a youngin, i reflect what’s in front of me,

becoming it / mirroring what presents itself

i see the world but don’t see myself in it

if i do, i can’t really define what it is

which is why i float so (short pause) i just exist, as is

observing & going through the motions

our elders tell us “that’s normal”,  to become what you see. (said in an adult tone) “you are young & haven’t gone through much”

they must be right, right?

they have lived longer & endured greater

so they must know better than us

i absorb their emotions, their opinions, their thoughts, their reactions

i claim them as if they are my own

you yell, watch me be louder

you’re angry, watch me be enraged

you disrespect … you catch my drift.

i become what appears in MY mirror

questioning that, doesn’t seem important & is reinforcement to my point

i’m still mirror - my nature though?

Years of not questioning, lacking introspecting,

has made me resolute - concrete in my build

i’ve gotten used to it

not once, skeptical of what has become 2nd nature

i mean i’ve thought of it, it’s crossed my mind a bunch since my teens but

i ain’t sit with it

“it’s okay to become what you see,” remember?

& that has not changed

they got angry, so i did too

they didn’t apologize so i didn’t

they never reached out so i didn’t either

my roots have grown deeper into the ground

cementing me in my ways

still, absorbing what ain’t mine and being ok with it

until a storm came, an argument

an argument with someone i care a lot about

he didn’t like my demeanor, he never really has

cause it doesn’t resemble his

so when you notice that’s not the case..

because this thing that you created,

this thing that you put time into forming -

you created with an expectation

for it be your splitting image

in every way & that hasn’t happened.

so you question it instead of accepting it -

that once your creation is ready for distribution &

it ain’t yours anymore.

it may come out just how you wanted it to, & you hope it does, & that’s great

it may also come out the complete opposite of how you wanted, & one would hope that’s great too

& Pops has had trouble with that

i lost my dad.

but i lost my dad

i reflect what’s in front of me

so if you come with anger & disrespect

what do you think you’re getting in return?

what do you think i will do?

the answer to those

are answers you already know

but, it’s not how i hope to remain.

it wasn’t until i lost him,

until we spoke for the last time

that i realized that’s not how i want to continue to be.

i want to be the type of mirror that reflects better -

that doesn’t just reflect what stands before it, as is

but elevates that reflection

revealing an upgraded, enhanced version of what is being shown

i want darkness to enter & for light to exit

when anger comes -  for love & calm to welcome it

that’s the type of mirror i want to be

one that has to power to change

that’s the type of mirror i will become

because continuing down this path

in the manner in which i tread is going to leave me beat i mean shietttt, I already am

tired of taking on the weight of other people’s emotions

it has taken a great deal of work, deep work to change but

I have stuck by my word

& those references & life experiences that i once lacked i got in the bag!

i have lived - endured pain & sorrow

i did what i said i would though,

what younger me put his attention & energy to &

because i can honestly say,

no longer mirroring what is presented but

with patience & the ability to see clearly what stands

controlling what i present, with love

no longer being influenced by what doesn’t come from me

but being driven by what comes from within me

projecting what I want to show

the fortress that is me, my body, & my mind

has become impenetrable to what isn’t for me

i’ve learned that when

& when he brings his friend rage to welcome them with slow breaths & some water, some ice cold water

took years to shed but

i am a portal now

& learn that if you don’t like what you see

YOU have the power to change it

& know that at the end once you’ve crossed that threshold

you’re different, no longer the person who entered

you have conquered the talking mirror

Get to know Ian better, @javielpapi_ for all his latest creative  endeavours.