Depop Happenings: Psychedelic Chore Coats for the End of Hibernation

Can you smell it? The glimmering dew? The blossoming snowdrops? The frozen rats dethawing from the expired February snows? You can finally take a deep breath. It seems that spring has finally sprung in New York City.

This catastrophic winter left me depleted, and I am frankly surprised I made it through. But, as it turns out, a couple of hours of fantastic weather can bring meaning back into one’s life. Suddenly there is a reason to emerge from hibernation and, dare I say it, a reason to get dressed. But spring, with all its merits, can be a confusing time. If you’re like me, you probably spent the last couple of months wearing your obligatory puffer and all-purpose Chelsea boots to one of the three places you deemed COVID-safe. With that in mind, my hope is that the recommendations below will prevent you from doing a double-take at the front door and trudging back to your fifth floor walk-up because you were over-eager with that cropped button-up. I don’t blame you. We are all trigger-happy, but save it for the summer, when you’re two shots of tequila and two shots of Moderna deep.

I hate to be the one to say this because I am not the groundhog that Mayor De Blasio “accidentally” killed, but it is still going to be cold through March and April. Granted, it is not going to be a polar vortex, but there are going to be occasions wherein a light but sturdy coat will be required. Since 1924, Mainers have had a go-to garment for such occasions: L.L. Bean’s iconic canvas coat. It will run you $149 new, but the vintage pieces made from the same nor’easter cotton are comfy but firm, cozy yet sturdy. There are a plethora of options on DePop from the last three decades that come in the classic Saddle and Olive colorways. The one below is a steal at $38. It’s seen its fair share of duck hunts. Its deep pockets can fit freshly caught game, so a bottle of natural wine won’t be a problem as you venture into a different kind of appreciation of the great outdoors: one that is a bit boozier and hopefully less violent.

Aristotle said, “In all things of nature there is something of the marvelous.” I can say with full confidence that Aristotle would have said the same for chore jackets. While there are hundreds of L.L. Bean canvas coats available, it is rare to find one that has the marvelous patterns of nature. Follow me through my own personal garden of Adonis, something I envision would be a cross between Opening Ceremony (RIP) and Prospect Park’s Long Meadow, as we discover magnificent treasures.

The piece below isn’t exactly the same as the canvas jacket, but it will do the trick. Its waist pockets and generous bellow pockets resemble a Barbour waxed jacket and, like a Barbour or an L.L. Bean canvas coat. It’s a one-of-a-kind floral print chore jacket that is a perfect mid-layer for springtime. It’s like if Queen Elizabeth’s Balmoral headscarves became a coat.

This vintage Evan Picone chore jacket reminds me of the bloom of the cherry blossoms at the Brooklyn Botanical Garden. I would say that it would be the perfect piece to wear to a peak-spring cherry blossom photoshoot for the Gram, but I must take this time to insist that you refrain from doing so. Communing with nature, the way Aristotle or Henry David Thoreau did, was not about adding duds to their camera rolls. Thoreau went to the woods to live deliberately, and I think we must all deliberately not indulge in this terrible tradition, out of respect for ourselves and nature, because nothing is more embarrassing and unnatural than asking your friend to go prone for the perfect flick.

Welcome to the eternal glen of springtime chore coats from Fruit of Venus, an artist who makes hand-made “upcycled goodies and vintage treats.'' Her work is joyful, playful, and psychedelic. The DIY touches imbue the pieces with a certain bright-and-sunny authenticity. I imagine sliding one of these bad boys on is like entering the dell where the Teletubbies reside and joining them for a rose petal and raspberry leaf spliff in the Tubbytronic Superdome while being waited on by the members of Superorganism and Ella Emhoff, along with her super-mellow secret service detail.

I was one of the 17.1 million people who watched Prince Harry and Meghan Markle’s interview with Oprah Winfrey, in which the former Duchess confirmed that the same family that colonized a quarter of the globe was indeed racist. This empire, which insists on being in our lives for good, but mostly for bad, has produced its fair share of fashion moments. (These are, of course, in addition to their incredibly harshed-out ensembles that include elaborate suits of armor, ostentatious coronation robes, and ceremonial military decorations for occupying India.) On the Rowing Blazers mood board Instagram account, I was blessed with an image of a young Harry looking impeccably cool and sporty wearing an orange and purple rugby shirt. In just two days, Harry revealed not only the stranglehold the tabloids have on the British royal family, but also the perfect mid-layer piece for Spring. Feeling inspired, I scoured the internet for something similar.

This piece, in nearly the same colorway as the shirt Harry donned, has plenty of miles on it. I’m sure after years on the pitch, it would be more than happy to take a new role as your favorite and most versatile big shirt. Laundry day? A Sunday Funday? This piece has got your back in an interesting color scheme that evokes both royal crests and rough-and-tumble hooligans.

While the previous rugby shirt summoned images of future Prime Ministers, Barons, and Dukes smashing each other in a muddy bog, this piece reminds us of America’s great royal family: capitalism. The faded blue Coca-Cola logo and the preppiness of the rugby shirt create an interesting contradiction. There is nothing more egalitarian than one of America’s most iconic brands, yet there is a hint of the traditions of the old world and its pastimes. The peak logomania is behind us, but there are still opportunities to engage with the nearly dead trend in a compelling way. The interplay between this shirt’s classic English style and the celebrated elixir of the States is interesting enough to pass the test.

One final gift from me to you is a Louisiana Channel interview with style icon, champion of the vernal equinox, and painter David Hockney on the inspiring arrival of spring. 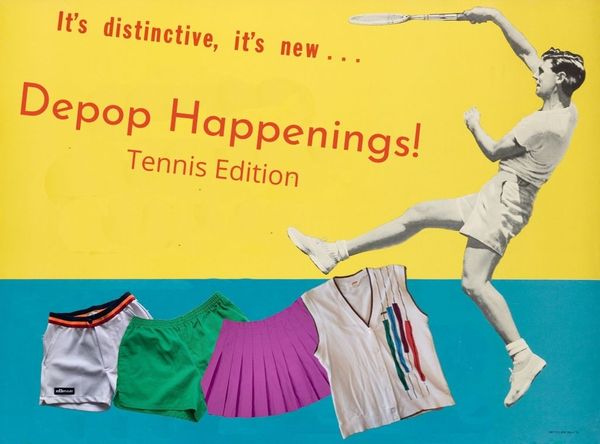